Rosine characteristically takes up the cudgels for a rigorously argued psychoanalytic theory, never too far away from the consulting room. In her theoretical exposition she takes a fundamental tenet of Freudian theory:

The killing of the father is in Freud’s view a requirement for the creation of the social order that from then on prohibits all killing.(p1)

The father however has only to be killed metaphorically: the actual exclusion of the father lies at the origin of so many psychopathologies, ranging from violence to the psychoses and perversions…(p1)

Her Freudian scholarship which as Michael Parsons comments, means that even the most knowledgeable of Freud’s readers will come away from reading her book knowing Freud better, provides the bedrock. This is then honed by her longstanding engagement with French psychoanalysis which has, in collaboration with a number of other redoubtable British colleagues, so enhanced clinical theoretical debate in the British Society.

Rosine takes her thesis and runs with it through anthropology, mythology, theology, to the opera house and the art gallery. It is a breath taking endeavour.

One of my particular favourites is her revisiting the story of Abraham and Isaac through the prism of her murdered father, dead father lens. She invites us to view Caravaggio’s and Rembrandt’s depiction of Isaac’s near sacrifice and argues that the two painters differ: Caravaggio renders the scene by inclusion of the violence of Abraham’s act and Isaac’s pain, Rembrandt softens the image. Rosine describes the extraordinary moment where Abraham, wielding the knife stops in mid-air. She argues that this

Marks the passage from the rule of the murderous, tyrannical, narcissistic father – God, who has the power of life and death over his son – to the dead symbolic father, the father of the law who forbids all killings. (p65)

There are countless other examples and my intent of course is not to give a resume of the book, but to whet your appetite or perhaps to excite your interest. Her thesis inaugurates an adventure abundant in scandal. She reminds us of the forever scandalous nature of the Freudian discovery of the desire to kill the father and its concomitant expression in infantile sexuality.  These scandalous notions of incestuous wishes, murderous fantasies even against those we love, maternal seduction and patricide underpin Rosine’s theorising. She critiques some contemporary theory which views psychoanalysis, particularly in the central notion of thirdness as a theory if co-creation and symmetry. Her thesis by contrast, emphasizes a non-linear temporality, disruption and challenge:

A profound dissymmetry, trauma and violence inherent in the analytic situation (p70)

And yet alongside the scandal of the violence, disruption and discontinuity and the centrality she gives to the traumatic nature of sexuality inherent in psychic development, Rosine traces how

Echoing I guess her own paternal line to Andre Green, (dare I say the dead father not the murdered father) who accompanies both author and reader as a sort of internal interlocutor, throughout the book. He famously writes how that which differentiates present day analyses and those in the past

..surely would be found among the problems of mourning(Green 1986p142)

In my view it is this link to mourning which returns us to what I said at the beginning. Rosine is never far from the consulting room and the book attests to her commitment to a clinical technique which may be rooted in a metapsychology which includes disruption and violence, but is certainly not characterised by doing violence to the patient’s experience on the couch. She argues for a technique which privileges the classical setting,

…the rules of which both analyst and patient submit (p71)

She describes how the psychoanalytic setting reflects the dead father complex

It is present in the construction of the setting that requires the invisibility and silence of the analyst the abstinence (sacrifice) of both analyst and patient.(p79)

Furthermore her clinical practice demonstrated throughout the book by vivid clinical accounts, insists that there is no place for the omnipotent analyst, but rather the analyst who as she describes

…characterised by such things as the open interpretation, and the special form of listening. Any of you here who have participated in Rosine’s much lauded teaching on psychoanalytic technique here at the Institute, or those of us who have recently been enjoying her inspired chairing of a series of Contemporary Freudian clinical presentations, will know the scrupulousness and compassion of her attention to the patient’s lived experience.

Whilst we are reading Rosine’s new book, she of course, will be venturing on another psychoanalytic journey, so I address these last thoughts to her. One of the many fascinating threads in your book which I find very compelling is your allusion in a quotation of Freud’s to the vital difference between the maternal and paternal in its link with the differing challenges the child faces. She or he feels more certain of the maternal line, knowing who his mother is (Oedipus excluded!), but always and forever unsure of the paternity. You quote Freud in his last writing in 1939. He writes:

…this turning from the mother to the father points…to a victory of intellectuality over sensuality….since maternity is proved by evidence of the senses while paternity is a hypothesis, based on an inference and a premise. (Freud 1939p113..RJP p19)

Rosine, in this book you demonstrate again how you love to interrogate myths. So what about the link here with Telemachus as he contemplates leaving his mother to the rabid ruthlessness of her warring suitors and the interminability of her weaving, when he goes in search of his father Odysseus? Telemachus declares,

My mother [he challenges not the truth of her claim to be his mother] says that I am Odysseus’ son, though of course I cannot know that; no man can ever be sure who his own father is….(Homer’s The Odyssey translated by Stephen Mitchell 2013 p6)

Nor woman either I might add!…. What we can be sure of is that to alert Rosine, perhaps even to challenge her with such a conundrum redolent with consequences for our clinical theory, she’ll run with it….a sequel then to your wonderful new book might be entitled: Whose Father is He anyway? 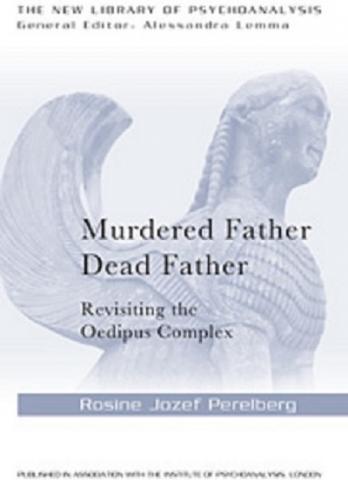