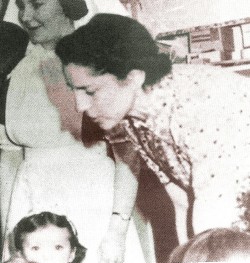 Esther Bick’s best-known contribution to psychoanalysis is her discovery of the potential of infant observation undertaken within the home over the first year or two of life to underpin the growth of a psychoanalytic perspective within the observer.

Her interest in very early infantile states of mind and in the relationships between babies and their primary carers also led her to clinical concepts which enrich the psychoanalytic understanding of infantile anxieties and defences.

Esther Bick (1902-1983) was born to an orthodox Jewish family in Poland. Her unusual intelligence and energy enabled her to continue her education in Vienna, where she studied with Charlotte Bühler and completed a doctorate. This background in systematic observation of young children was very important in her later creative invention of a new form of naturalistic observation of babies.

She came to Britain as a refugee just before the Second World War. Almost all her family died in concentration camps and the psychoanalytic community gradually became her replacement family. She settled in Manchester, working in wartime nurseries, and began an analysis with Michael Balint. She completed her psychoanalytic training in London and then started a second analysis with Melanie Klein. In 1948 she was invited by John Bowlby to head a child psychotherapy training at the Tavistock Clinic, which had just joined the new National Health Service. The training started the following year and she continued to run it until 1960. She remained an active supervisor of child psychotherapists in training in subsequent years, alongside teaching at The Institute of Psychoanalysis.

Bick gathered an unusually talented group of students in the early years of the Tavistock training including Mary Boston, Martha Harris, Frances Tustin, Irma Pick, Isca Wittenburg and Edna O’Shaugnessy. The combination of Bick’s inspirational teaching and her intuitive grasp of talent achieved a great deal.

Her contributions to psychoanalysis are not properly represented by her few published papers for two reasons. She was not a natural writer, despite the fact that her two best-known papers have classic status. Rather her forte was as a teacher. Her imaginative sensitivity to the forms of infantile experience were vividly communicated through her teaching of infant observation and her clinical supervision, especially of severely disturbed children. Her acute mind, love and grasp of relevant detail, and her unflinching directness made her a remarkable, if at times alarming, teacher. She could bring to life the psychosomatic experience of a baby and the overwhelming anxieties evoked in new parents with memorable eloquence. She conveyed a passion for enquiry, in which close observation was the tool and theory was to be put to one side. Detailed notes were therefore of the essence and devotion to the task was expected.

The earlier of the two papers now so widely cited was ‘Notes on infant observation in psycho-analytic training’ (1964). This sets out clearly her model of infant observation and her view of how much can be learned from it — how to observe, the nature of early infantile anxiety, especially the baby’s fear of ‘falling to bits’, the impact of maternal anxiety and postnatal depression, and the significance of good observational capacities for future child analysts. She emphasised the gathering of data over time, the need to wait for meaning to emerge, and the observer’s responsibility to respect their role as learner and to behave with tact and reliability.

The second is ‘The experience of the skin in early object relations’ (1968) which expounds her understanding of the function of the skin as a primary container. The skin can be felt to hold together the parts of the self which have as yet no coherence. Maternal containment is what supports the growth of the baby’s psychic skin, and when such containment is faulty, for whatever reason, the baby may resort to ‘second skin’ defences which are omnipotent pseudo-independent forms of protection using muscular tension to hold the self together and prevent disintegration. The infant without a sense of internal space makes adhesive links to his object, sticking to the surface in the absence of access to a three-dimensional object.
Bick’s ideas took shape at the same time as Bion’s work on ‘A theory of thinking’, and these two explorations of the emotional and cognitive dimensions of the early mother-child relationship are profoundly complementary.

Bick’s understanding of primitive forms of omnipotence and her delineation of ‘second skin’ phenomena have proved particularly fertile for work with the severely deprived, maltreated and neglected children so often now referred for treatment and also in understanding children on the autistic spectrum. This has made her work particularly salient for child psychotherapists working in clinics.

The now well-established International Journal of Infant Observation is a testament to the breadth of her ongoing influence and its evolution.