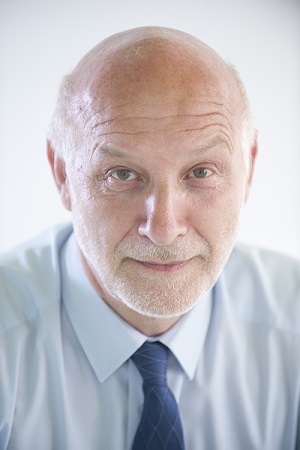 Peter Fonagy is a training and supervising analyst in the British Psychoanalytical Society, as well as Professor of Contemporary Psychoanalysis and Developmental Science at University College London (UCL), Head of the Research Department of Clinical, Educational and Health Psychology at UCL, and CEO of the Anna Freud National Centre for Children and Families. Since 2013 he has been a National Clinical Advisor to the Department of Health and NHS on the Children and Young People’s Improving Access to Psychological Therapies programme.

Fonagy was born in Budapest in 1952. In 1967, his family left Hungary and resettled in Paris. However, his parents wanted him to receive a British education and sent him on his own to study in London. With no friends or family, and no knowledge of English, Fonagy became quite depressed and faced severe academic difficulties. After a neighbour suggested he seek help, he entered into psychoanalysis with child psychotherapist Anne Hurry at the Anna Freud Centre (at that time, the Hampstead Clinic). With her help, Fonagy’s depression remitted, his academic performance picked up and, after finishing school, he was accepted to UCL to study Psychology. Fonagy sees this period in his life as a turning point, during which he discovered how deeply effective psychoanalysis could be; it was this experience that led him to train as an analyst himself.

After graduating in Psychology, Fonagy studied for a PhD in Neuroscience. He later took up a UCL lectureship in Psychopathology and trained as a clinical psychologist. He then applied to train at the Institute of Psychoanalysis, and in 1980 began his training analysis. After qualifying as an analyst, Fonagy also completed the child psychoanalysis training at the Anna Freud Centre (as it was, by then, called). By the time he took up the Freud Memorial Professorship at UCL in 1992, Fonagy’s varied experience and training had led him to follow an interdisciplinary approach, which has shaped his research and clinical work ever since.

In the 1980s, Fonagy worked with child psychotherapist George Moran to treat children and young people suffering from brittle diabetes: a type of insulin-dependent diabetes in which the sufferer fails to maintain control over blood sugar levels. It is a dangerous illness, and was proving very difficult to treat. Moran and Fonagy worked together to develop a new treatment approach, which centred on talking with patients about their inner lives and emotional worlds. They found that, using this method, they were able to help the children to develop greater capacities to think and regulate feelings. This, in turn, led them to better manage their disease and to make significant physical and intellectual progress.

Around this time Fonagy also began to work with patients suffering from severe Borderline Personality Disorder (BPD), and soon discovered that a classical analytic approach to their treatment was not effective. Meanwhile, his deepening interest in the work of Melanie Klein and Donald Winnicott, the object relations school, and attachment theory, stimulated a shift in his conceptual framework, and helped him develop a different way of thinking about BPD. This evolved into his theory of mentalization and, in collaboration with psychoanalyst and psychiatrist Anthony Bateman, a new treatment method: Mentalization-Based Treatment (MBT). MBT is now used widely with BPD patients, and Fonagy and Bateman are also developing the model to treat patients with other disorders, including antisocial personality disorder, substance abuse problems and eating disorders, and to support interventions for at-risk mothers. In Fonagy’s view, these groups, while in some respects experiencing very different difficulties, are all characterised by an impaired capacity to appropriately conceive of the mental self and its relationship to the social world.

Inspired by the thought of a wide range of psychoanalysts, Fonagy was particularly helped by the Sandlers. Joseph Sandler was a mentor at UCL from whom Fonagy learned an enormous amount, while Anne-Marie Sandler was his supervisor during both his clinical psychology and child analysis training. The Sandlers had an enduring impact on his approach to clinical and theoretical work, as well as being personally and professionally supportive in the early stages of his career. Another crucial theoretical underpinning of his work is attachment theory, in which he has found a combination of empirical rigour and deep insight into psychological development and disorders. This combination has, in turn, come to be characteristic of Fonagy’s own work, which is exploratory, innovative, yet firmly anchored by empirical research and evidence. In this regard he takes great pride in following in the footsteps of Anna Freud and Dorothy Burlingham, who pioneered the developmental psychopathology approach he has used throughout his career. He has also continued the joint commitment of these clinicians to systematising psychoanalytic ideas, and to ensuring their solid conceptual and empirical foundation.

A further major influence on Fonagy’s work, Kleinian theory, has provided him with a valuable description of the mind’s capacity for thinking about the world, and of how that capacity is vulnerable to emotional demands. The Klein-Bion model of the mind demonstrates that the interface between its mechanistic and representational elements is far more permeable or fluid than we might like to believe. In people with a disorder such as BPD, these mental mechanisms are even more vulnerable. For example, people who have been severely mistreated in childhood reach adulthood with a damaged capacity to think, the result of an intense resistance to thinking about other people’s minds. This resistance is itself a defensive reaction to the deeply disturbing experience of finding other people’s thoughts and feelings to be hostile or violent. What originally protects the mind from unbearable destructiveness ultimately thwarts the capacity to see oneself and other people coherently and clearly. Entrenched as this defence mechanism is within a person’s mental organisation, it hinders emotional development, damages relationships and obstructs productive thought. In treating such disorders, Fonagy sees his job as helping patients to recreate their emotional capacities by thinking alongside them, and supporting the reorganisation of their minds to become more open and capable of relating to others; a form of developmental help as Anna Freud would have conceived of it.

Fonagy believes psychoanalysis can be enormously helpful in enabling people to think and feel in ways that would otherwise be inaccessible to them; in other words, in expanding their capacity for mentalization. Epistemologically, his ambition is to maintain psychoanalysis in concert with other disciplines that investigate the human mind, and to try to reconcile the various experiences of human beings into a singular mode of understanding. Above all, he believes that psychoanalysis should remain in dialogue with what we know about the mind from other disciplines, including neuroscience, sociology and anthropology. In his view, psychoanalysis is currently the best psychology we have.

2012 Luyten, P., van Houdenhove, B., Lemma, A., Target, M. and Fonagy, P. A Mentalization-Based Approach to the Understanding and Treatment of Functional Somatic Disorders. Psychoanalytic Psychotherapy, 26(2), 121-140.

2002 Fonagy, P., Gergely, G., Jurist, E. and Target, M. Affect Regulation, Mentalization, and the Development of the Self. New York, Other Press.

1995 Fonagy, P. Playing with Reality: The Development of Psychic Reality and Its Malfunction in Borderline Patients. International Journal of Psycho-Analysis, 76, 39-44.