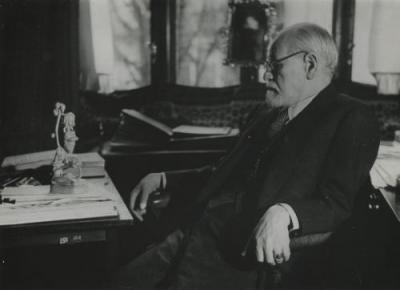 Sigmund Freud was the founder of psychoanalysis and, over his immensely productive and extraordinary career, developed groundbreaking theories about the nature and workings of the human mind, which went on to have an immeasurable impact on both psychology and Western culture as a whole.

Sigismund Schlomo Freud was born on 6th May 1856 to Jewish parents, Amalia and Jakob Freud, in a part of the Austro-Hungarian Empire now in the Czech Republic. When Sigmund was three, the Freuds moved to Vienna. He excelled academically, developing a passion for literature, languages and the arts that would profoundly influence his thinking about the human mind. Freud became very interested in medical and scientific research, and went on to study medicine at the University of Vienna. While studying, Freud developed a particular fascination with neurology, and later trained in neuropathology at the Vienna General Hospital. In 1885, Freud travelled to Paris to study at the Salpêtrière Hospital with Jean-Martin Charcot, a famous neurologist studying hypnosis and hysteria. Freud was deeply affected by Charcot’s work, and upon returning to Vienna he started using hypnosis in his own clinical work with patients.

Out of these experiments in hypnosis, and in collaboration with his colleague Josef Breuer, Freud developed a new kind of psychological treatment based on the patient talking about whatever came to mind – memories, dreams, thoughts, emotions – and then analysing that information in order to relieve the patient’s symptoms. He would later call this process ‘free association’. Early forays into this new ‘talking cure’ by Breuer and Freud yielded promising results (notably in the famous case of ‘Anna O.’) A year before marrying his fiancée Martha Bernays, Freud published Studies on Hysteria (1895) with Breuer, the first ever ‘psychoanalytic’ work. In this book, Freud and Breuer described their theory that the symptoms of hysteria were symbolic representations of traumatic, and often sexual, memories. By 1896, Freud had abandoned hypnosis and started using the term ‘psychoanalysis’ to refer to this new clinical method and its underlying theories. The following year, Freud embarked upon a self-analysis, which he deemed necessary both as a means of expanding and testing his theory of the mind, and as an exercise in honesty and self-knowledge. This self-investigation led him to build upon his and Breuer’s original theory that neurosis was caused by early trauma, and to develop substantially his ideas about infantile sexuality and repression. In the coming years and decades, Freud’s clinical work with his patients – among them the famous ‘Dora’, ‘Rat Man’, and ‘Little Hans’ – would remain the basis and core of his work, and would provide the vital material for his continual advancement and refinement of his theory of the mind.

In 1899 Freud published The Interpretation of Dreams. In this, one of his most important works, he described dreams as a form of wish-fulfilment, and asserted that: “[T]he interpretation of dreams is the royal road to a knowledge of the unconscious activities of the mind.” In his formulation, dreams were the result of the unconscious trying to resolve conflicts or express desires that, in our conscious minds, are not allowed to be acknowledged. He saw the preconscious mind as a kind of censor or bodyguard, only allowing unthreatening thoughts into the conscious mind. According to Freud, in dreams this censorship becomes weaker, and forbidden wishes can become visible to our sleeping minds, albeit in some kind of symbolic disguise or code. Freud believed these dream symbols were far from simple to interpret, often embodying several meanings at once. It was also in The Interpretation of Dreams that Freud introduced perhaps his most famous concept of the Oedipus Complex, and it was here that he first mapped out his topographical model of the mind. Between 1901 and 1905 Freud continued to elaborate and expand his model of human psychology, and he wrote two more very important works. In 'The Psychopathology of Everyday Life', he introduced the idea of ‘Freudian’ slips and ‘verbal bridges’, and in 'Three Essays on the Theory of Sexuality,' he delineated his early thinking about psychosexual development and infantile sexuality.

By the beginning of the twentieth century Freud’s ideas were drawing interest from several colleagues in Vienna. In 1902 a group of physicians and psychiatrists formed the Wednesday Psychological Society, which met every week in Freud’s apartment at Berggasse, 19. The original group was made up of Freud, Wilhelm Stekel, Alfred Adler, Max Kahane, and Rudolph Reitler, all Viennese physicians. By 1906 the group had grown to a membership of sixteen, including Carl Jung and Otto Rank, both of whom would go on to be highly influential psychoanalytic thinkers. At this point the group decided to re-name and establish itself as the Vienna Psychoanalytic Society. Freud and Carl Jung quickly became close colleagues and friends, both fascinated and enthused by the possibilities of psychoanalysis. In 1909 they travelled, along with Hungarian analyst Sándor Ferenczi, to the USA, where Freud gave a series of psychoanalytic lectures. It was after these American lectures that Freud’s renown and influence began to grow far beyond the confines of the Viennese medical community. American psychologists and neurologists were galvanised by Freud’s new ideas, and within a few years both the New York Psychoanalytic Society and the American Psychoanalytic Association were founded.

A year after the outbreak of the First World War, at the age of sixty, Freud gave his ‘Introductory Lectures on Psychoanalysis’ at the University of Vienna. In them he outlined the key tenets of psychoanalytic theory, as he had developed them over the past two decades, including his ideas of repression, free association and libido. The lectures were published two years later, and went on to become his most popular publication. The year after the end of the war, in 1919, Freud examined soldiers traumatized by their experience of fighting. He did not write much explicitly about the psychological damage done by warfare, but it nevertheless influenced his thinking significantly, for example in his concepts of repetition compulsion and the death instinct.

In 1920 Freud suffered a personal tragedy when his daughter Sophie died from the influenza eviscerating an already war-damaged Europe. She was aged only twenty-seven when she died, pregnant, and a mother of two. Three years later Freud would also lose Sophie’s son Heinerle, his grandson, at the age of four. He wrote in a letter: “I have hardly ever loved a human being, certainly never a child, so much as him.” He said he had never felt such grief. The year of Sophie’s death, Freud published 'Beyond the Pleasure Principle', a paper introducing his concepts of repetition compulsion and the death instinct, and building upon his earlier description of the function and operation of dreams. It is in this work that he revised his theory that human behaviour is almost entirely driven by sexual instincts, instead portraying the psyche in a state of conflict between opposites: creative, life-seeking, sexual Eros; and destructive, death-bent Thanatos. In Freud’s formulation, the death instinct was an expression of a fundamental biological longing to return to an inanimate state. This new theory was not well received by most of his analytic colleagues in Vienna, though it would, in time, have a big impact on the thinking of several preeminent psychoanalytic thinkers, notably Jacques Lacan and Melanie Klein.

In 1923 Freud published his important paper, 'The Ego and the Id'. Here he further developed and elucidated his model of the human mind, introducing his ‘Superego-Ego-Id’ formulation to supersede the 'conscious-preconscious-unconscious' structure described in The Interpretation of Dreams. In this year Freud also discovered a pre-cancerous growth in his jaw, certainly caused by his regular and liberal consumption of cigars. He nonetheless found himself unable to give them up, and likened his addiction to them to his obsessional collecting of antiquities. The growth later turned into cancer and would ultimately cause his death sixteen years later.

At the invitation of the League of Nations and its International Institute of Intellectual Co-operation at Paris, in 1932 Albert Einstein initiated an exchange of letters (for subsequent publication) with Freud, concerning the subject of war and how it might be avoided. Einstein and Freud had met several years earlier in Berlin, and were very interested in one another’s work. Only a year after this epistolary exchange, 1933 Hitler was elected Chancellor of the German Reich. In 1930 Freud had been awarded the Goethe Prize for his contributions to psychology and German literary culture, but in January 1933, the newly empowered Nazis seized Freud’s books, among many other psychoanalytic and Jewish-authored works, and publicly burned them in Berlin. The Nazis described this destruction as acting, "[A]gainst the soul-destroying glorification of the instinctual life, for the nobility of the human soul!” Meanwhile Freud’s comment on these barbaric proceedings was rather more ironic: "What progress we are making. In the Middle Ages they would have burned me. Now, they are content with burning my books."

As the Nazis gained power and territory, and their policies grew ever more flagrantly discriminatory, Freud continued to write and practise in Vienna. As the 1930s wore on, friends and colleagues encouraged him to consider leaving Vienna but, even after the Anschluss in March 1938 and the ensuing displays of anti-Semitic brutality, he showed no desire to move. Ernest Jones was very worried about this determination to stay in what was becoming an increasingly dangerous place for Jews, and he flew into Vienna soon after the annexation, determined to get Freud to move to Britain. Freud at last agreed and, after much financial and political negotiating with the Gestapo on the part of Jones and others, he and his daughter Anna left for London in June 1938. They moved into 20 Maresfield Gardens, in Hampstead (now the Freud Museum), where Freud continued to write and treat patients, despite the painful advancement of his jaw cancer. In London Freud worked on his final books, Moses and Monotheism, and the incomplete Outline of Psychoanalysis. He was visited by Salvador Dalí – a passionate devotee –, his fellow Viennese writer Stefan Zweig, Virginia and Leonard Woolf, and H.G. Wells.

By the autumn of 1939, the progression of Freud's cancer was causing him severe pain and had by this point been declared inoperable. He asked his doctor and friend, Max Schur, to euthanize him with a high dose of morphine, and he died on 23rd September 1939, not long after the outbreak of World War Two. His body was cremated at Golders Green Crematorium. Ernest Jones and Stefan Zweig spoke at his funeral.

You can learn more about Sigmund Freud with our online Introductory Lectures course.