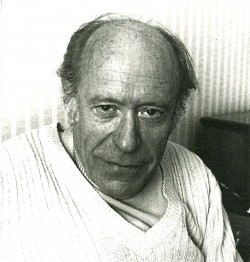 Herbert Rosenfeld (1910-1986), alongside Segal and Bion, made several post- Kleinian innovations in his clinical and theoretical contributions, drawing on the rich lessons from his experience of treating schizophrenic patients.

He charted pathological processes which emerge early in the paranoid-schizoid position and can severely impede later ego-development. These also throw light on schizoid states of mind that are present in borderline and neurotic patients.

Rosenfeld was known for his unique capacity to put himself imaginatively into his patients' shoes and understand their experience from their position.

Born in Nuremberg, Rosenfeld came to England to escape Nazi persecution in 1935. He started his analysis with Klein and qualified in 1945 at The Institute of Psychoanalysis.

States of depersonalisation and confusion

Rosenfeld (1947) opened up new ground when he showed how excessive splitting and projective identification of parts of the self into objects underlied his patient's ego fragmentation and states of depersonalisation.

In another early paper (1950) Rosenfeld described how confusional states arise when the normal and structuring splitting between ‘good’ and ‘bad’ breaks down. If envy predominates destructive attacks are mounted against the ‘good’ object itself so that it becomes impossible to distinguish ‘good’ from ‘bad’ and unbearable states of confusion results.

One of the ways of attempting to deal with such unbearable states is through narcissistic omnipotence. Rosenfeld's most original and significant contribution was his work on pathological narcissism in his two classic papers (1964,1971a). They describe two aspects of narcissism. One is the emergence of a grandiose self-idealisation built on the projective appropriation of all the good qualities of the object and the expulsion of all the bad parts of self into the object which is kept devalued (1964). This ‘mad’ self-idealisation is a defence against the separateness of the ‘good’ object that arouses unmanageable destructive urges, like the envious spoiling of the good breast-mother as a source of life, and the primitive anxieties that ensue such as confusion, fragmentation and disintegration. Narcissism also takes the shape of the idealisation of the ‘bad’ parts of the self, often represented as a mafia gang, which are turned to as a source of superior strength and become mobilised in an organised attack against the dependent self and its sane object relations (1971a). Such narcissistic organisations create a split in the self and keep the sane self stunted in its development.

In his last work, Impasse and Interpretation, (1987) Rosenfeld gave more weight to the role of trauma and environmental failures in the development of narcissistic organisations. He became concerned that patients who had been deprived or traumatised in their childhood might be re-traumatised in their analyses if the analyst put too much emphasis on innate destructiveness.

His later views lead to controversy between different analytic groups at The Institute of Psychoanalysis. But his book is a crucial reminder for analysts on both sides of the controversy to listen carefully to the patient's responses to their interventions, so as to recognise possible errors and unhelpful attitudes in their stance.

1964 Rosenfeld, H. 'On the psychopathology of narcissism: A clinical approach', International Journal of Psychoanalysis. 45: 332-337; republished in Psychotic States. Hogarth Press (1965).

1971a Rosenfeld, H. 'A clinical approach to the psycho-analytical theory of the life and death instincts: An investigation into the aggressive aspects of narcissism', International Journal of Psychoanalysis. 52: 169-178; republished in E. Spillius (ed.) Melanie Klein Today, Vol. 1., Routledge (1988).

1971b Rosenfeld, H. 'Contribution to the psychopathology of psychotic states: The importance of projective identification in the ego structure and the object relations of the psychotic patient', in P. Doucet and C. Laurin (eds.) Problems of Psychosis. Amsterdam: Excerpta Medica.