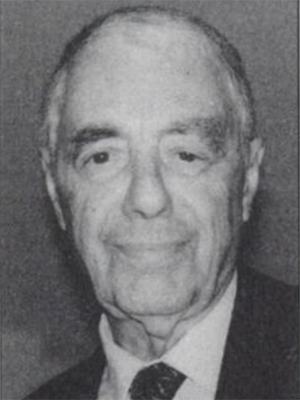 Adam (Amadeo) Limentani was born in Rome. He was forced to emigrate to England in 1938 soon after graduating from medical school.

He worked as a psychiatrist before training in the 1950s within the Middle group, subsequently renamed The Group of Independent Analysts.  The title of his book: “Between Freud and Klein” (1989) emphasises his preferred clinical and theoretical position.

Limentani subsequently worked for many years at the Portman Clinic and in private practice. He became a Training Analyst and was very active in the Education Committees within the Society, alongside teaching and supervising. He worked as a consultant for the London Clinic for many years. He was the President of the British Society from 1974-1977 and he later served as President of the International Psychoanalytic Association from 1983-86.

His 1966 paper “A re-evaluation of acting out in relation to working through” was a seminal contribution to the elaboration of the concept of acting-out. Limentani proposed that acting-out should be viewed as a form of communication of traumatic affects which need to be recognised by the analyst, rather than only representing a form of resistance. He also pointed out that the analyst can unwittingly contribute to the patient’s need to act out in the analysis. The issue of the analyst’s counter-transference runs as a theme through all his clinical accounts.

Many of Limentani’s papers reflect his extensive experience of treating patients at the Portman Clinic. In his paper:  "Clinical types of homosexuality" (1979) he argues that homosexuality should be understood as a defensive solution to a variety of neurotic and psychotic problems. The papers on transsexualism, bisexuality and the vagina-man (the male counterpart of the phallic woman), also illustrate the Freudian perspective concerning the plasticity of psycho-sexuality. Limentani emphasised the vital importance of the role of the father in the control of cross-gender identifications and projections. His papers all indicate his interest in early disturbances in the psychic structuring of the self and symbol formation.

His position in the Independent group illustrated the foundational meaning of the Middle group: to crucially evaluate the views of the other two groups and select what seemed clinically most valid. In his teaching and his writing Limentani combined a critical and integrative approach whilst always eschewing over-simplifications. This theoretical stance was also evident in his clinical approach, in which he combined a tolerance for human conflict and suffering with a depth of understanding of the complexities of psychic life.

Adam Limentani, Between Freud and Klein: The Psychoanalytic Quest for Truth and Knowledge (1988)