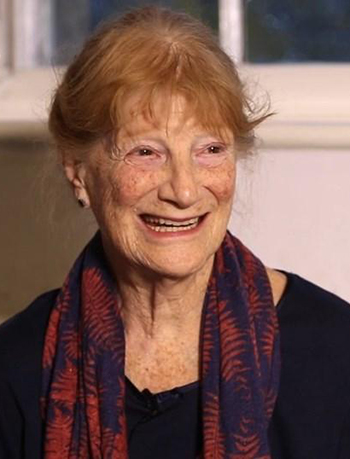 Edna O’Shaughnessy is a Distinguished Fellow and Training and Supervising Analyst of the British Psychoanalytical Society. She came to psychoanalysis from a background of philosophy.

She moved to Britain from South Africa in the 1950s, and trained as a child psychotherapist at the Tavistock Clinic where she was supervised by Esther Bick, Betty Joseph and Hanna Segal. She then trained as a psychoanalyst at the British Society in the 1960s, with Roger Money-Kyrle as her training analyst.

From the extensive bibliography of O'Shaughnessy's published writings (listed in the downloadable document at the foot of this page) two areas of her work are highlighted here; firstly on defensive organisations of the personality, and secondly on the abnormal superego.

Using Klein’s theories, O’Shaughnessy was one of an influential group of post-Kleinian analysts who in the late 1970s and 1980s explicated the vicissitudes of defensive organisations of the personality. Her two most important papers in this area are entitled, ‘A clinical study of a defensive organization’ (1981) and ‘Enclaves and Excursions’ (1992).

In the first of these papers, she gives a vivid account of an analysis of a man whose organised system of defenses went through four different stages as he emerged from narcissism. In the first stage the patient was assailed with anxieties when his defensive organisation was breaking down. In the next stage, the organisation, having been re-established, could now be brought into the transference relationship to the analyst. In the third phase, the patient was able to exploit his defensive organisation for the gratification of his cruelty and narcissism. In the fourth and final stage the patient was more able to tolerate anxieties and his narcissistic organisation became less rigid, though splits in his ego remained.

O’Shaughnessy’s paper can be read not only for its insights into the pathological nature of defensive organisations, but also the rigidity they confer to psychic functioning. She showed how the organisation is often kept hidden until the analyst is able to observe the lack of developmental progress occurring in the patient despite considerable strengthening of the ego.

These concerns are considered further in O’Shaughnessy’s second major paper concerning pathological organisations, entitled, ‘Enclave and Excursions’ (1992). She coined these terms for different types of enactments the analyst is pulled into to protect the patient’s equilibrium in the face of emotional contact that is felt to be too frightening. In enclaves, the patient draws the analyst into an over-close relationship which doesn’t cause the patient or analyst too much disturbance. The relationship with the analyst is a narcissistic one, the patient only relating to aspects of the analyst that fit in with certain pre-determined views of who the analyst should be. In excursions, it is not so much a limiting of the contact with the object but a more total avoidance of emotional contact. She emphasises the spatial nature of these narcissistic positions, further elaborated by Steiner in his concept of psychic retreats (1).

Abnormal forms of the superego

Reading O’Shaughnessy’s papers, one is struck not only with the clarity of her thinking but the depth of her understanding and her ability to think laterally about complex issues. She conveys compassion for the anxieties and dilemmas that confront both patient and analyst, an attitude she transmits through her work as a supervisor. She also recognises the individuality of a particular patient/analyst coupling, so that the uniqueness of their encounters is acknowledged, as well as the universality of some of their struggles.

O’Shaughnessy continues to write and supervise and recently co-edited and published a book with Elizabeth Spillius entitled Projective identification, the Fate of a Concept (2011). A book containing a selection of her papers is currently being edited for publication by Richard Rusbridger.

2011 Spillius, E. and O’Shaughnessy, E. (eds.) Projective Identification: The Fate of a Concept. Routledge. Visit the library section for more information about this book.