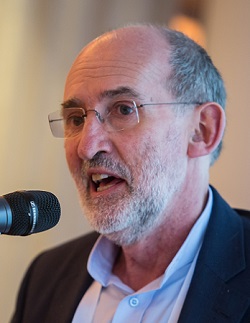 David Tuckett is a Fellow of the Institute of Psychoanalysis, and currently Professor and Director of the Centre for the Study of Decision-Making Uncertainty at University College London (UCL). As an undergraduate he studied Economics and Politics with Sociology at the University of Cambridge, during which time he became very interested in psychoanalysis. He went on to train as an analyst a few years after graduating and qualified with the British Psychoanalytical Society in 1977.

Throughout his career Professor Tuckett has worked part-time in private clinical practice, while also conducting research in the fields of psychology, medicine, the social sciences and, more recently, economics. He has held positions at various academic institutions, and taught sociology and psychology to medical students as part of their training. He was formerly President of the European Psychoanalytic Federation, Editor in Chief of the International Journal of Psychoanalysis and Principal of the Health Education Studies Unit at the University of Cambridge. In 2007 Tuckett won the Sigourney Award for his contributions to psychoanalysis.

Tuckett’s published work has focused on some of the core issues in psychoanalytic practice, particularly the clinical situation and training. He has been influenced by a broad range of psychoanalytic thinkers, in particular by Sigmund Freud, Anna Freud, Melanie Klein, Wilfred Bion, Donald Winnicott, Ella Sharpe, Charles Rycroft, Herbert Rosenfeld, Betty Joseph, Ron Britton, Antonino Ferro, Ernest Jones and John Rickman. He has two main interests: the fundamentals of clinical technique and how to talk about them; and analytic training. He has always believed in a pluralistic approach to psychoanalytic theory and technique, and in the importance of scrutinising individual theories according to their merits, rather than to the school or cultural tradition to which they belong. He emphasises the importance of this kind of empirical attitude in Psychoanalysis Comparable and Incomparable: the Evolution of a Method to Describe and Compare Psychoanalytic Approaches (2008). The work of comparison is, in Tuckett’s view, a highly valuable tool for both refining one’s own ideas and deepening our understanding of psychoanalysis as a whole. As he writes in Psychoanalysis Comparable and Incomparable: ‘Recognizing difference provides scope for thought […] Difference, differentiation and comparison allow articulated thought and are at the heart of much creative development in many fields.’

Professor Tuckett is a committed advocate of international collaboration and comparative research. Beginning in 2002, he led a six-year research project conducted by the European Psychoanalytic Federation (EPF) Working Party on Comparative Clinical Methods, the conclusion of which was Psychoanalysis Comparable and Incomparable: the Evolution of a Method to Describe and Compare Psychoanalytic Approaches, which he co-curated with Dana Birksted-Breen, Paola Mariotti and seven other European colleagues. Holding over sixty workshops in Prague, Sorrento, Helsinki, Vilamoura, Athens and Barcelona, the programme set out, in Birksted-Breen’s words, to, “increase communication between psychoanalysts working in different traditions, using the annual conferences of the European Federation as the point of contact.” It was also an attempt to “define what psychoanalysis is”, a question Tuckett has explored and held up for interrogation over many years. He has also been involved with the EPF’s efforts to train psychoanalysts in the former Soviet Union. In 2002 the International Psychoanalytic Association and the EPF formed the Han Groen Prakken Psychoanalytic Institute for Eastern Europe (PIEE), to provide and develop psychoanalytic training in countries that had been unable to develop psychoanalytic institutions or practice over many decades.

For the past decade and a half, Tuckett has worked in a field of enquiry he has himself developed: ‘emotional finance’. It draws on his long-held dual interest in psychoanalysis and economics, and uses his substantial experience of the former to better illuminate the latter. Tuckett is interested in subjective experience, and the functional and dysfunctional ways in which people manage their emotional lives. Moreover, he considers psychoanalytic approaches to be highly relevant and helpful to understanding the various sectors and contexts that make up human social life – including the financial world. His innovative emotional finance model has emerged in stark contrast to an economic tradition that has long insisted on the irrelevance of subjectivity in the context of financial markets, as though it were an area quite separate from emotional life. Tuckett’s work instead emphasises subjective, emotional experience as a vital element in the decision-making processes continually taking place in the unpredictable and vastly complex financial system. He believes that our understanding of the financial sector and economics will be greatly enhanced if we take into account the emotional dynamics constantly at work in individuals: hope, excitement, fear of loss, grief, and so on. This research has drawn the attention of major financial and economic institutions, such as the European Central Bank, the Bank of England, the Cabinet Office and the Foreign Office, and he has been invited to the World Economic Forum.

Tuckett’s emotional finance model has roots in Melanie Klein’s theory of phantastic objects, and his ‘divided and integrated states’ derive from her concept of the paranoid-schizoid and depressive positions. In a 2008 paper, ‘Phantastic Objects and the Financial Market's Sense of Reality: A Psychoanalytic Contribution to the Understanding of Stock Market Instability’, Tuckett set out his theory that psychoanalytic ideas can ‘illuminate instability in financial markets and its widespread human consequences.’ He posited that, ‘integration of emotional experience may be more useful to economic agents than the present mainstream theories which contrast rational and irrational decision-making and model them as making consistent decisions on the basis of reasoning alone.’ Fund managers’ and financial workers’ relationships to financial instruments are equivalent, Tuckett argues, to internal object relations. Mainstream economics’ rejection of the centrality of uncertainty and emotions in decision-making has contributed to extremely damaging global financial crises, including the most recent in 2008.

Since being granted a 2006 Leverhulme Research fellowship to carry out a ‘psychoanalytic study of investment markets’, Tuckett has worked alongside several researchers to develop a psychoanalytical understanding of behaviours and decision-making in financial markets and the wider economy. His most recent work has been in developing what he calls Conviction Narrative Theory (CNT), which aims to provide a new basis to understand changes in the direction of the economy. This work is supported by the Institute for New Economic Thinking (INET). CNT is the theory that ‘Conviction Narratives’ allow individuals to, ‘prepare to execute particular actions even though they cannot accurately know what the outcomes will be.’ With reference to Bion’s work in group psychology, Tuckett argues that these narratives also, ‘provide an easy means for actors to communicate and gain support from others for their selected actions as well as to justify themselves.’ Expanding an area that has been ignored by conventional economic thinking, Tuckett is thus using his psychoanalytic understanding to enquire into the narratives underlying decisions in high-pressure, unpredictable fields like finance. This is only the latest example of a career-long commitment to interdisciplinary exploration, and to the application of psychoanalytic ideas to a range of fields and social situations.

2017, Tuckett, D. and Nikolic, M. ‘The Role of Conviction and Narrative in Decision Making under Radical Uncertainty’. Theory & Psychology (in press).

2008, Tuckett, D., ed. Psychoanalysis Comparable and Incomparable: The Evolution of a Method to Describe and Compare Psychoanalytic Approaches. The New Library of Psychoanalysis, Routledge.

2008, Tuckett, D. and Taffler, R. ‘Phantastic Objects and the Financial Market's Sense of Reality: A Psychoanalytic Contribution to the Understanding of Stock Market Instability’. International Journal of Psychoanalysis, 89(2): 389-412.

2005, Tuckett, D. ‘Does anything go?: Towards a framework for the more transparent assessment of psychoanalytic competence’. International Journal of Psychoanalysis, 86:31-49.

2000, Tuckett, D. ‘Theoretical Pluralism and the Construction of Psychoanalytic Knowledge’, Changing Ideas In A Changing World: The Revolution in Psychoanalysis. Essays in Honour of Arnold Cooper. Karnac, 237-246.

1994, Tuckett, D. ‘The Conceptualisation and Communication of Clinical Facts in Psychoanalysis – Foreword’. International Journal of Psychoanalysis, 75:865-870.