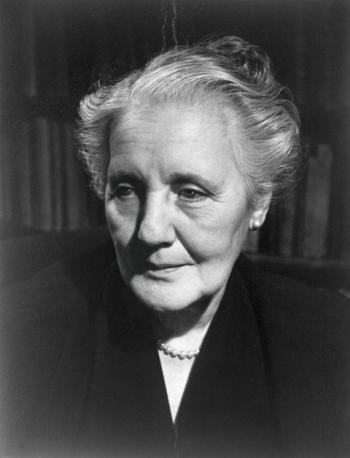 Melanie Klein was a controversial yet highly influential and powerful member of the British Psychoanalytical Society for over thirty years.

Her theories about the development of a child's inner world transformed psychoanalysis and have had a deep and far-reaching impact. Although profoundly rooted in Sigmund Freud's thinking, Melanie Klein asserted that all human beings relate to others from birth and, consequently the transference in psychoanalytic treatment is always alive and active.

Born the fourth and last child to Jewish parents in Vienna, her elder sister died when Klein was four, and her elder brother died when she was twenty. At the age of twenty- one, after giving up on her ambitions to become a doctor, she married her brother's friend, Arthur Klein. They went on to have three children, but the marriage was unhappy and Klein became very depressed. The Klein family moved around Central Europe for work and it was in Budapest that Klein had a period of psychoanalytic treatment with Sándor Ferenzi which sparked what would become her lifelong passionate interest in psychoanalysis and Freud's ideas. The Kleins moved to Berlin in 1921 and Melanie Klein, by then aged thirty-eight, joined the nascent Berlin Psychoanalytical Society. With the encouragement and interest of Karl Abraham, she began to analyse young children. She wrote case notes on 'Fritz', 6 year old 'Erna', 13 year old 'Felix', 3 year old 'Peter', 2 year old 'Rita', 9 year old ‘Greta', 3.5 year old 'Trude', and 4 year old 'Ruth'. These notes formed the basis of her subsequent rich clinical and theoretical thinking and of her first major publication some years later, 'The Psychoanalysis of Children' (1932).

In her work with children, Klein noticed that their play and the toys they used carried important symbolic meaning for them, and that this could be analysed much in the same way as dreams could be analysed in adults. Unlike the psychoanalytically- informed approach to the education and socialisation of children that was used in the early 1920s in Vienna by Anna Freud and Hermine Hug-Helmuth, in Moscow by Sabina Spielrein and Vera Schmidt and at the Maltings House School in Cambridge by Susan Isaacs, Klein in Berlin offered her young patients something far closer to adult psychoanalysis. She saw them at set times, just like in adult analysis, and she became more and focused on their fears and anxieties as expressed in their play, and on the defences they used against them. This radically different, pioneering work with children was not well received in Berlin, and she was treated with some suspicion and disdain. Alix and James Strachey however, became fascinated with her work and, in 1925, invited her to visit London, where the lectures she gave were warmly received.

Loss and Mourning: The Depressive Position

Klein, like Alix Strachey, had psychoanalytic treatment with Karl Abraham in Berlin, though this was sadly brought to an end after only nine months due to Abraham's illness and death at the end of 1925. After this loss Klein decided to move to London, where she would spend the rest of her life working as a psychoanalyst and developing her highly original work. Over the course of only a few years she became a central figure in the world of psychoanalysis and in the British Society. However, her early theoretical papers in London, including ''Early Stages of the Oedipus Complex' (1928), and 'The Importance of Symbol formation' (1930), continued to cause controversy in the psychoanalytic world of Central Europe. Undeterred by criticism or opposition, Klein's curiosity in the inner world of her adult and child patients remained undiminished. By anchoring her theoretical ideas so firmly in her clinical experience, Klein's work demonstrated that her psychoanalytic technique of understanding and interpreting anxieties, especially fear linked with aggressive impulses, could free up the patient and enable further exploration of their inner worlds.

Although Klein's son, Erich, and her daughter, Melitta, had joined her in London it was her eldest son, Hans' death in the Alps in 1934, aged twenty-seven, that was another in a string of personal tragedies for Klein. As she grieved for her son, she continued to work, producing two major papers on what she called the ‘depressive position’: 'A Contribution to the Psychogenesis of Manic-Depressive States' (1935), and, 'Mourning and its relation to Manic-Depressive States' (1940). In these papers Klein showed how the child becomes aware that they do not control their world but, instead, the child needs and depends on loving figures . However, in the depressive position, the child feels they have attacked and destroyed aspects of these much needed figures which causes painful anguish and, in favourable circumstances, a wish to restore and protect these loving objects develops. The hallmark of development in the depressive position is a capacity for concern and a wish to make ‘reparation’, for damage done. The upheaval of the Second World War brought yet more change to Klein's world. She moved to Pitlochry in Scotland for a short time, where she treated ten-year-old 'Richard'. The account of his analysis is written up as, 'The Narrative of a Child Analysis' (1961) and this remains a vivid portrayal of her understanding of 'Richard's' fears and anxieties at a turbulent moment in history.

Klein was soon to be involved in her own turbulent controversy with Anna Freud and the other Viennese analysts who had escaped to England from Nazi Europe and, like her, been welcomed by the British Psychoanalytical Society. This took place against the backdrop of Klein’s difficult relationship with and estrangement from her daughter Melitta, now also an analyst in the British Psychoanalytical Society. Klein and her closest colleagues at the time – Joan Rivière, Susan Isaacs and Paula Heimann – wrote papers demonstrating that her ideas were 'psychoanalytic'. The most renowned of these papers is Susan Isaacs’, 'The Nature and Function of Phantasy' (1943), which broadens and deepens Freud's original use of the term to cover all mental activity and underlying dreams, symptoms, play, thought and patterns of defence. In Klein’s view, phantasies interact reciprocally with experience in the world, to form the developing emotional and intellectual characteristics of each individual.

In 1946 Klein published 'Notes on some schizoid mechanisms'. Seventy years later, this remains a hugely important work, and is currently the most cited paper on the psychoanalytic publishing website, PEP-WEB. In this paper Klein describes the primitive defence of ‘splitting’ in response to overwhelming anxiety, and delineates the ‘paranoid-schizoid position’, a universal mental state, from which the depressive position can emerge. This groundbreaking paper first mentions the concept of projective identification which will become a much used and appreciated concept for future generations of psychoanalysts. Klein's understanding of primitive mental states, enabled the treatment of psychotic patients and others who, until then, had not previously been thought suitable for analysis.

In the 1940s and 50s a group of brilliant young analysts grew around Klein, inspired by her work. They all went on to make their own very significant contributions to psychoanalysis; Wilfred Bion (1897-1979), Herbert Rosenfeld (1910-1986), Hanna Segal (1918-2011) being of particular note. In 1952 a collection of papers, 'New Directions in Psychoanalysis', was published, based on a special issue of the International Journal of Psychoanalysis celebrating Melanie Klein's 70th birthday. The proceeds from this publication enabled her to fund a Trust with the aim of promoting research and training based on her ideas.

Melanie Klein’s final paper, 'On the sense of loneliness', was published three years after her death, and remains a moving, mature integration of her work and an important study of the human condition. Her legacy, much as her life, remains controversial. Despite the obstacles Klein faced, being a woman born at the height of the Austro-Hungarian empire, with no formal education and who suffered much personal tragedy, she pushed at the boundaries of psychoanalysis. She dared to make her own observations of the psychoanalytic encounter, to have original ideas about the formation of the internal world, and, most radical of all, she put the passions and experiences of the infant at the core of our understanding of human development.

The Writings of Melanie Klein
Volume 1 'Love, Guilt and Reparation and other works' 1921-45
Volume 2 'The Psycho - Analysis of Children'
Volume 3 'Envy and Gratitude and other works' 1946-63
Volume 4 ' Narrative of a Child Analysis'

You can learn more about Melanie Klein with our online course.