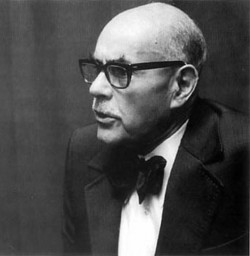 Wilfred Bion (1897-1979) was born in Muttra, northwest India, and was educated at boarding school in England - where he was unhappy, missing his parents, his Aya and the India he loved.

He fought in France in the Tank Regiment during the First World War and was awarded the DSO (Distinguished Service Order), and, by the French Government, the Légion d'Honneur.

After the war Bion took History at Queen's College, Oxford and later went on to study medicine at University College London. After qualifying as a doctor, he spent seven years at the Tavistock Clinic in London, training in psychoanalytic psychotherapy. While there he saw Samuel Beckett for therapeutic interviews. In 1938 he began his first training analysis with John Rickman. This was brought to an end by the outbreak of the Second World War, during which Bion worked with traumatised soldiers in military hospitals.

Around 1946 Bion entered into training analysis with Melanie Klein, and he became a full Member of the British Psychoanalytical Society in 1950.

Bion married twice and had three children; his daughter Parthenope went on to become a gifted analyst in Italy. In 1968, at the age of 71, Bion moved to California. He returned to England shortly before his death in 1979.

While studying at UCL Bion met Wilfred Trotter, another physician interested in the workings of the mind. Trotter’s Instincts of the Herd in Peace and War (1) was an important influence on Bion's interest in group mentality.

Bion’s work with traumatised soldiers during the Second World War, and his role working with Officer Selection Boards, helped form the basis of his ideas expressed later in the papers published asExperiences in Groups.

Bion is best known for the work stemming from his psychoanalysis of patients in psychotic states, by building on and expanding Klein’s concepts of projective identification and the two positions, paranoid-schizoid and depressive, in dynamic equilibrium, and by introducing the notion of Container-Contained (♀ ♂); and by elaborating a theory of thinking with emotional experience at its core. His best-known work, in addition to Experiences in Groups and other papers, are the four books of the sixties - Learning from Experience, Elements of Psycho-Analysis, Transformations, and Attention and Interpretation.

Bion considered that the development of his ideas concerning the inner world of the individual, particularly in relation to thinking and primitive unconscious phantasy, incorporated and transformed his earlier ideas about group mentality. However, he did not receive support from Melanie Klein for the latter ideas, nor for his explanation of countertransference in terms of an expanded version of Klein’s concept of projective identification.

An increasing number of analysts are showing an interest in exploring the clinical relevance of Bion’s later ideas, some developed mainly during his time in Los Angeles. The Memoir of the Future is an allusive work which reworks many of Bion’s theoretical ideas in the form of a novel, something he had always wanted to attempt. His concept of ‘O’ still remains something of a challenge to contemporary analysts, but serves to remind us all that the phenomena we study are elusive and somehow ‘behind’ those surface manifestations which strike our sensory and perceptual systems, and that what we normally deal with are transformations of what is really there. Bion’s work continues to be found fresh and clinically relevant to new generations of practising analysts and researchers in many different fields and in many different parts of the world.

Bion’s work is best viewed not in isolation, in spite of his unique and inimitable style of writing and thinking, but together with that of Herbert Rosenfeld and Hanna Segal.

Learn more about Bion with our online courses.