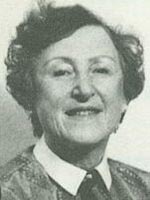 ​Dinora Pines trained as a medical doctor during the Second World War, having obtained a first degree in modern languages.

She worked in general practice and as a dermatologist before training as a psychoanalyst.  Her experiences as a doctor facilitated her developing interest in listening to her patients and especially to what was not expressed verbally but rather through their bodies. She felt fortunate to have met Hilda Abraham (daughter of Karl Abraham) in the hospital with whom she discussed cases.  After qualification as a psychoanalyst, she worked with adolescents at the Brent Adolescent Centre for some years as well as in private practice. She subsequently became a Training and Supervising analyst in the British Society. She was an active member of the Society, working on the Education committees, teaching and supervising. She was an important member of the B group (The Anna Freud Group) which became the Contemporary Freudian Group in the 1980s.

Her early interest in women’s psychology and psychosomatic illness developed over many years, culminating in the publication of a book of her papers in 1993: “A woman’s unconscious use of her body.” [republished in 2010]  Although her parents had emigrated from Russia at the beginning of the 20th century, she lost family members in the holocaust, and as a psychoanalyst she worked with survivors. Two of the papers in her book describe aspects of analytic work, in particular the vicissitudes of the transference and counter transference, with such patients.  The range of her papers reflects her psychoanalytic explorations of the life cycle as manifested particularly through the sexual life of women-adolescent sexuality and promiscuity, pregnancy and motherhood, miscarriage and infertility and the menopause.

Her interest in processes of somatisation and the ways in which the body can be recruited by the mind, reflected both her medical experiences and knowledge and her understanding of the role of infantile sexuality in adult life.  Her work investigating the psychological impact and meanings of female sexuality followed on and developed that of Helene Deutsch [The psychology of Women 1944].  Dinora Pines was one of the first analysts in this country to work analytically with women struggling with problems of infertility at a time when new medical procedures were developing.  She explored the place of pregnancy as a developmental phase in a woman’s lifelong task of separation-individuation. In her work with women who had repeated miscarriages, abortions or difficulties conceiving, she described the dual identifications with her won life-giving mother and with the foetus representing her own infantile self.  Unresolved ambivalence, conflicts, deprivations and early traumas all contributed to problems experienced in maintaining a pregnancy. She pointed out the importance of understanding the difference between the wish to be pregnant from the wish to be a mother. She demonstrated that analytic work with women at this time could make a substantial difference to the resolution of earlier difficulties that had been reactivated.  Whilst she published predominantly about her work with female patients, she was always aware of the importance of the couple and of the impact of earlier generations on the woman’s psyche.

Throughout her writing Dinora Pines emphasised the need for compassion, by which she meant, not a superficial sympathy, but rather an acceptance and tolerance of our human limits.  Her analytic stance vis a vis her patients was one of curiosity and a wish to understand and relieve suffering; she wrote vividly of the counter transference strains inevitable in encountering her patients hatred and destructiveness whilst remaining in touch with their vulnerability and nascent desire for loving relationships. She was well aware of the role of shame and guilt in provoking strong resistances to the analytic process in her patients.

She was also an important figure in the development of psychoanalysis in Russia; she ran a group within the British Society for those interested in contributing to this development.