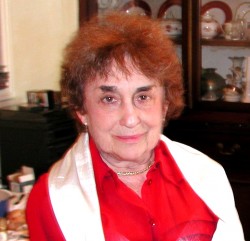 Ruth Riesenberg-Malcolm was an influential member of the group of senior Kleinian psychoanalysts who developed the application of the theories of Melanie Klein and Wilfred Bion.

She was an admired teacher in the UK and internationally. She was especially valued in Spanish speaking countries where she could teach in her native language. She presented papers at congresses and symposiums elaborating concepts as they are found in clinical practice. Her collected papers, On Bearing Unbearable States of Mind, expertly edited and introduced by Priscilla Roth, is a handbook of Kleinian clinical practice, illustrating how to understand and put these theories to use.

Riesenberg-Malcolm came to London as a Fulbright Fellow. Already trained as a psychoanalyst in her home country of Chile, she was an experienced clinician, having become at a young age the director of a psychiatric clinic. She soon became a Training Analyst of the British Society and remained in London for the rest of her career. Like many analysts of her generation she worked with children as well as adults, although the main body of her work was with troubled and borderline adults, which is described in her published papers.

Process and purpose of psychoanalysis

The title of Riesenberg-Malcolm’s book captures her main preoccupation, namely how to help patients bear the pain which has hitherto prevented their development. Her work focuses on the process and purpose of psychoanalysis rather than on a particular idea or concept. To achieve this she mobilised considerable intuition, sensitivity and intelligence, supported by the theoretical understandings developed by Freud and Klein. From her earliest work she understood the centrality of the transference/ countertransference as the site where psychic work can take place and this extended to her understanding of the nature of psychic life and internal objects as described by Klein. Betty Joseph’s influence extended this understanding to psychic actions between the patient and analyst and Rosenfeld’s understanding of the nature of splitting provided for Ruth Malcolm a deep appreciation of the defences which the mind mobilises in the face of acute anxieties.

However for her, Bion’s work was central in providing the concepts necessary for understanding the processes of projective identification as communication and the possibilities of transformation. Along with her colleagues, Hanna Segal, Betty Joseph, Ron Britton, John Steiner, Michael Feldman, Irma Brenman Pick and Edna O’Shaughnessy, she looked closely at the processes of the psychoanalytic session. She followed the total way the patient relates to the analyst, in verbal and non-verbal ways, the countertransference in the analyst and the way interpretations affect the patient. Taking up Bion’s conceptualisation of the selected fact she would organise her experience of the patient moment to moment in the session and both become very close to the patient’s emotional experience and able to formulate the significance of what was taking place.

The 'here and now' of transference

Her writing includes extended discussions on the place of history and reconstruction in psychoanalysis and how this must be understood in the ‘here and now’ of the transference, something which she felt strongly about. This did not prevent her awareness of the importance of understanding the genesis of the patient’s internal object relations which were being manifest in the session, and in providing a convincing continuity for the patient with the experiences of their early life. She also agreed with John Steiner’s conceptualisation of the psychic retreat as a defence against the anxieties of integration and growth.

However, taking her work as a whole, perhaps Riesenberg-Malcolm’s greatest contribution is her understanding of clinical technique, which is so well demonstrated in her paper, ‘The Three W’s, what, where, and when, the rationale of interpretation’.  After a clinical discussion she would frequently ask, “and what would you say to the patient?” This question encapsulates her approach and understanding. For her only in the moment of the session and in the act of the interpretation, does the analyst fully commit himself to trying to make contact with the patient.

All Riesnberg-Malcolm’s papers contain extended and illuminating accounts of clinical sessions. She sets out to bring the session and the patient to life and then she adds her intuition, her countertransference and her thinking, what she says and what she doesn’t say. You can witness both the transformational process and the limitations of analysis. Out of this she also shows how a theory can develop which is clinically true and not a pseudo fact or rationalisation. Frequently as she shows this entails the analyst bearing what is unbearable for the patient. For Riesenberg-Malcolm theory grew out of clinical practice and enabled greater depth in the work, which in turn provided the ground for further conceptualisation.