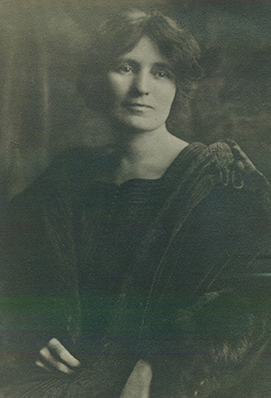 She studied literature, drama and poetry at Nottingham University and worked as a teacher until her early forties. Her interest in psychoanalysis developed from her love of literature and her teaching work with young people. She was analysed by Hans Sachs in Berlin and became a member of the BPAS in 1921. She was an active member as a teacher, supervisor and training analyst. She was involved in and made significant contributions to the Controversial Discussions.

Freud’s belief that the essential themes of his theory were based on the intuitions of the poets, and that psychoanalysis was born as a result of the scientific transposition of the literary schools he liked the best was embodied in Sharpe’s practice and in her writings. Her book Dream Analysis: A Practical Handbook for Psychoanalysts was published in 1937, is still in print, and presently (2015) being translated into Japanese. Her interests took her into the actual practice of psychoanalysis and also deep into the theories and concepts which underpin its daily work. She wrote on visual art, aesthetics, imagination, creativity, metaphor and symbolism. All her papers on technique, theory and literary interpretation, most of which appeared in the IJPA during her lifetime were published in 1950 as Collected Papers on Psychoanalysis.

Ella Sharpe’s appeal is instantly understandable when one reads her papers. She possessed a directness and candour which is rare in psychoanalytic writing. Her openness concerning her clinical work and the honesty with which she invites the reader to view the workings of her own mind is most disarming. She had a good prose style and a seasoned appreciation of the art of teaching. Her intuitive use of her own mind led to an appreciation of counter-transference two decades before Heimann, Winnicott, and Racker finally put the concept on the theoretical map. A generation before Lacan, through her background in literature, and drawing particularly on her knowledge of the poetic diction of lyric poetry, she was already writing on the importance of language, and on the grammar of the unconscious.

She is probably best known now for her seven papers on technique. In these, originally presented as seminars to BPAS candidates in the 1920’s, she demonstrates how she placed personal creativity and the imaginative use of the self at the heart of the psychoanalytic process. Her first paper is devoted exclusively to the analyst, and to what she considered the essential qualifications for the acquisition of technique. She placed a strong emphasis on the need for any would-be analyst to recognise that he must in the first instance be a patient. Indeed, he must always regard himself as a patient. This attitude makes all the difference between acquiring a technique that is a living entity rather than a dead letter. Psychoanalysis is both a science and an art. She wrote, ‘Psychoanalysis ceases to be a living science when technique ceases to be an art. The body of knowledge increases by increase of technical skill, not by speculative cunning’. She believed that clinical practice was shaped by the internal contents of one’s mind, and by the presence in that mind of the capacity for movement and elasticity.

Ella Sharpe believed that no psychoanalyst could understand everything about a patient, no matter how long he had known the patient, nor how experienced the analyst was. With regard to understanding the mind, she believed that the degree of insight one might have in one direction would often be accompanied by a corresponding blindness in other directions. Ella Sharpe knew that the content of new ideas offered advancement to humanity and those who produced new content deserved respect, but ideas once public were democratically available for everyone. But most of all the liberation of an individual mind was paramount, and the celebration of that liberty in daily life proof of its durability.

Explaining the benefits she derived from her life’s work, she wrote:

"While our task lies primarily with the unconscious mind of the patient yet personally I find the enrichment of one’s ego through the experiences of other people not the least of my satisfactions. From the limited confines of an individual life, limited in time and space and environment, I experience a rich variety of living through my work. I contact all sorts and kinds of living, all imaginable circumstances, human tragedy and human comedy, humour and dourness, the pathos of the defeated, the incredible endurances and victories that some souls achieve over human fate. Perhaps for this I personally am most glad I made my choice of psychoanalysis, the rich variety of every type of human experience that has become part of me, that never would have been mine either to experience or to understand in a single mortal life, but for my work."