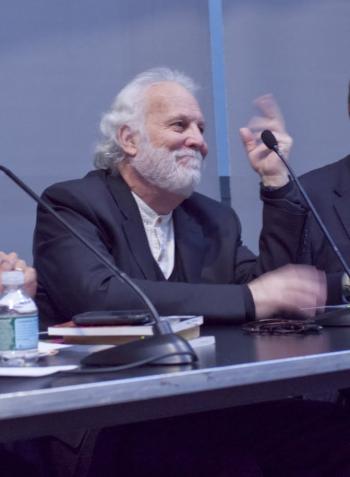 Christopher Bollas grew up in California.  After a degree in History  at the University of California, he worked at a day centre for autistic and schizophrenic children.

There he encountered the work of Anna Freud, Bettelheim and Mahler but was also drawn to the writings of Klein, Winnicott and Tustin to help him imagine these deeply disturbed internal worlds.

While studying for a PhD in English Literature at the University of Buffalo he completed a clinical training in Ego Psychology, then in 1973 he moved to London, where he trained in psychoanalysis at the Tavistock Clinic and with the British Psychoanalytical Society. Influential supervisors and teachers included Paula Heimann, Marion Milner, John Bowlby, David Malan and Francis Tustin, and he also became interested in French psychoanalysis, working with J-B Pontalis and Andre Green.

In the mid 1980s he returned temporarily to the USA as Director of Education at the Austen Riggs Center, Professor of Literature at the University of Massachusetts, and Professor at the Cambridge Hospital at Harvard. He then lived in London for some years before moving back again to the USA in 2013.

In well over 100 published papers, Bollas has made a very wide contribution. His work covers psychoanalytic theory, clinical technique and psychopathology; he has applied psychoanalytic thinking to fields such as literature, architecture, history, social anthropology and politics, and he has produced three novels and a volume of plays. Bringing together theory and technique, normality and pathology, he explores the complex inter-relationship between the private, internal, subjective world and the world of external objects.

His writing belongs firmly in the Independent tradition, exploring issues that have concerned Independent analysts since the early days of psychoanalysis in Britain. Rooted in the theory of the mind presented by Freud in The Interpretation of Dreams (1900), his thinking centres upon the inherent creativity and complexity of the unconscious, offering a new model: the Receptive Unconscious. Although certain areas of the unconscious will be governed by repression, Bollas asserts that, from the beginning of life, the infant also seeks experiences that will enable the basic idiom of the self to be elaborated. Extending Freud’s concept of ‘nodal points’, he suggests that these perceptions are selected and received into the unconscious, where they form clusters or matrices of internal intensity that he calls ‘psychic genera’. As each new thought or impression becomes linked with other unconscious constellations it forms part of a growing network of ideas, images and feelings.

This model places a central emphasis on interaction with the external world, and this begins with the primary maternal relationship, in which the mother plays a transformational role for the infant self. This aspect of Bollas’s thinking reflects a deep affiliation with Winnicott’s ground-breaking ideas about the relationship between infant and mother, and with his theory of the ‘intermediate area’ in the mind - the arena for creativity and imagination.

Bollas has introduced many other new psychoanalytic concepts, including: the aesthetic moment, the unthought known, psychic focus and psychic dissemination, intersubjectivity and interformality, self presentation and self representation.  At times he coins new terminology, for example:  processional knowledge, the ghostline personality, normotic illness.

His central contribution to clinical technique has been his championing of the technique of free association. Whilst acknowledging that the British focus on the transference relationship has yielded invaluable understandings, he believes that it has also brought about a change of emphasis and thus a radical side-lining of Freud’s fundamental means of understanding the unconscious.  He argues forcefully for the reinstating of Freud’s emphasis on the logic inherent in the sequence in which the patient presents his associations in the session, and his model of the Receptive Unconscious expands the scope of the free associative process by suggesting that it gives access, not merely to repressed material, but also to the vast, complex network of psychic genera.

Bollas believes that the essence of the clinical situation lies not only in the explicit narrative themes that emerge, the uncovering of repressed psychic material and the reworking of prior relationships, but also in the unique, idiomatic atmosphere of that particular analytic pair and their mutual encounter. He writes:

Patients free associating in this respect are akin to artists manifesting a deeply subjective style through the form of their representation, much like a poet’s signature is revealed not through the poem’s content message, but through its form. (2002, p.62-3)

He suggests that, through free association, the psychoanalytic process can provide a transformative experience by liberating the intrinsic creativity of the unconscious.

The Shadow of the Object:  Psychoanalysis of the Unthought Known (Free Association Books 1987)

Being a Character : Psychoanalysis and Self Experience (Routledge 1993)