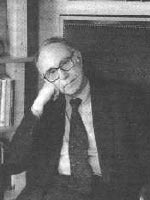 ​André Green was born in 1927 in Egypt. In 1946, already attracted by psychiatry, he travelled to Paris to study medicine, completing the psychiatry exams in 1953. He established links with St Anne’s Hospital, a unique centre at that time for multidisciplinary encounters between psychiatrists, psychologists and anthropologists. He was highly inspired by Henri Rey who was resident there from 1925 to 1965. In 1956, he started a four-year analysis with Maurice Bouvet. After Bouvet’s death, he had an analysis with Jean Mallet and later Catherine Parat. He followed Lacan’s seminars for a period of seven years.

In 1965, after completing his analytic training, Green became a member of the Paris Psychoanalytic Society (SPP) of which he was President from 1986 to 1989. From 1975 to 1977 he was a Vice-President of the International Psychoanalytical Association and from 1979 to 1980 a Freud Memorial Professor at University College London. He was elected an Honorary Member of the British Psychoanalytical Society.

Two threads permeate Green’s writings: on the one hand, the relevance of the paternal derived from Lacan’s work and on the other, the concern with the maternal connected, in different ways, with the work of Winnicott and Bion.

Over his life time, Green conducted a masterful and scholarly dialogue with philosophers, scientists and anthropologists. There are numerous gems of thinking to be found in his work, such as the link between the pleasure of life and the return of the repressed, or the phenomenon of irradiation (retroactive reverberation - anticipatory annunciation) in analytic listening. Major themes in his work are centred on a theory of affects, a theory of representation and of language, the work of the negative (with its constellation of concepts such as the dead mother, death narcissism, white psychosis and negative hallucination), narcissism and borderline states, the objectalising function, thirdness, and a metapsychological theory of temporality. In addition, he produced a body of work on applied psychoanalysis. According to Green, the aim of the psychoanalytic process is not so much to make something conscious, as to recognise the unconscious.

Green suggests that in certain schools of thought, where the analysis is restricted to the interpretation of transference, there is a limitation of the analytic task that is prejudicial to the freedom and spontaneity of discourse, and represents a return to suggestion. He believed that all interpretations take place within the transference context (le cadre du transfert), even when they don’t allude to it. Moreover, all the material in any analysis contains elements belonging to different temporal dimensions.

In the analytic process the analyst is confronted by the fundamental experience of distress (hilflosigkeit) in the patient. The analyst’s counter-transference is receptive to the traces left by these infantile experiences. By inviting the patient to abandon the control mechanisms, the analytic situation may revive the traumatic situation.

Green, A. (1986). On Private Madness. London: The Hogarth Press and The Institute of Psychoanalysis.

Green, A. (1999a) The Work of the Negative. London: Free Association Books.

Green, A. (1999b). The Fabric of Affect in Psychoanalytic Discourse. London: Routledge and The New Library of Psychoanalysis.

Green, A. (2011). Illusions and Disillusions of Psychoanalytic Work. London: Karnac.