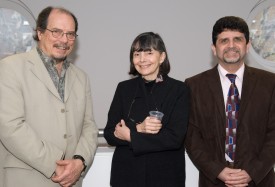 ​Gregorio Kohon was born in Buenos Aires, Argentina. After studying law, literature and philosophy at university, he qualified in the end as a Clinical Psychologist. He is also a poet and novelist.

In 1970, he moved to London, where he studied and worked with the Scottish psychiatrist and psychoanalyst R.D. Laing. After qualifying in 1979 as a psychoanalyst, he moved to Australia 1988, where, together with his wife, Valli Shaio Kohon, he founded the Brisbane Centre for Psychoanalytic Studies. Kohon is a Training Analyst of the British Psychoanalytical Society. Since his return to London in 1995, he works in private practice.

The assertion that psychoanalysis, like art, resists simplification is woven like a golden thread though the work of Gregorio Kohon. Since there is excess in its concepts, psychoanalysis as a discipline always exceeds what can be known about it. It cannot be codified and systematised. This points to a level of irreducible uncertainty in the realm of knowledge itself.

With conceptual clarity, Kohon’s work affirms and elaborates fundamental Freudian ideas of infantile sexuality such as the importance in both sexes of the phallic stage for psychic structuring.  He clarifies the role of Nachtraglichkeit or deferred action (the idea that experiences and memories are reworked in the light of later experience and development) and the symbolic importance of paternal function. He contributes theoretically in differentiating the fundamental structuring function of castration anxiety and the Oedipus complex in Freud, from the earlier Oedipus complex, linked to weaning, later theorised by Klein. Kohon illustrates the clinical usefulness of the above theoretical tenets in original clinical papers on hysteria, obsessional neurosis and perversion.

Kohon has also written about the links between experiences in the early fusional mother child relationship, what he calls primary madness, and psychotic breakdown. In Love and its Vicissitudes, co-written with André Green, he draws our attention to a paper not read much by Anglo-Saxon analysts, Tausk’s 1919 paper ‘On the origin of the ‘influencing machine’ in schizophrenia’. Kohon has also contributed to theoretical debates on distinguishing hysteria and borderline psychopathology, from his own work on symbolic impoverishment.

In his first edited book The British school of psychoanalysis: The Independent tradition, Kohon provides a view of the contribution of the Independent tradition to psychoanalysis, including a historical account of how the Independent ‘group’ developed out of the group of non-aligned analysts following the Controversial Discussions. He elaborates the contribution of Independent analysts to theories of object relations and of counter-transference. In this, Kohon reminds us that in any moment there are always two subjectivities in the room weaving the analytic encounter.

Kohon is influenced by French psychoanalysis, by Lacan’s ‘Mirror stage’ and the consequences of alienated aspects of the ego. He differentiates need from desire and marks out the privileged position of the wish and its link with phantasy for a psychoanalytic understanding of the mind. For the Anglo-Saxon world, Kohon integrates structuralism in regarding the taboo against incest and the regulation of desire as a structural category. He sets store by the importance of primal phantasies and makes use of Laplanche’s theory of seduction through enigmatic signifiers. Kohon has championed the work of André Green by editing a book of papers in homage to Green, The Dead Mother. Furthermore, he would later develop Green’s work on the negative, by demonstrating its usefulness in aesthetic interpretation, which in turn enriches understanding of the “work of the negative” for clinicians.

In his writings, Kohon draws on rich cultural resonances of his Latin American origins, Spanish language and Jewish heritage.  He brings to life Freud’s concept of Nachtraglichkeit (deferred action) in understanding the writing of the history of Mexico and of the massacre of Jews at Masada. He demonstrates the impact of temporality on memorialisation in a study of the memorial to the Jews who resisted the Nazis during the rebellion of the Warsaw Ghetto.

Kohon’s work on creativity extends from writing on Stephen King’s Misery, to his most recent book on psychoanalysis and the aesthetic. He makes use of Freud’s theory of the uncanny in understanding aesthetic experience. Kohon links the creative process to periods of psychic withdrawal that are non-pathological, but draws upon a silent self, ultimately unknowable, illustrating these ideas via the work of Louise Bourgeois and Franz Kafka.

Kohon’s affirmation that all experience of art and psychoanalysis is autobiographical resonates with a tradition of Independent psychoanalysts who have written very personally about their work as analysts. His most recent book Reflections on the Aesthetic Experience: Psychoanalysis and the Uncanny brings 45 years of psychoanalytic experience together with a lifetime’s appreciation of painting, writing, sculpture, architecture and commemorative memorials. The result is a rich text in which, whilst differentiating art from psychoanalysis, Kohon shows their deep relatedness in offering us portals to self and life experience. His interpretations of aesthetic objects offer original ways of experiencing and understanding the uncertainties and terrors of borderline experience. Implicit is the understanding that it is as true for the creative artist as for the psychoanalyst that, in letting go of clinging to certainty, space is opened for creative life.  This is beautifully illustrated in his most recent book, in which he translates the words of the Spanish poet Antonio Machado:

‘Walker, there is no road,/ the road is made by walking’.