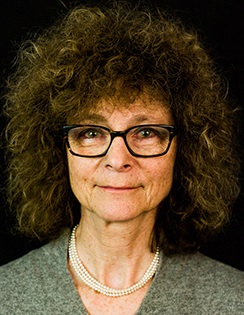 Catalina Bronstein is a Training and Supervising Analyst of the British Psychoanalytical Society, and its former President. She is also a visiting Professor in the Psychoanalysis Unit at University College London. For the past twenty-five years she has worked at the Brent Centre for Young People, and chairs a psychotherapy workshop there. She is also part of numerous international workshops and committees.

Bronstein was born and brought up in Buenos Aires, Argentina. She became interested in psychoanalysis as a teenager, surrounded by a culture in which psychoanalytic ideas occupied an important position. On reading Freud’s Interpretation of Dreams, she was fascinated by his model of the human mind and developed a serious ambition to train as a psychoanalyst. After school she studied medicine, specialising in psychiatry, which was heavily influenced by psychoanalytic theory. Indeed, at that time in Argentina psychiatrists in training were asked to be in four-times-per-week psychoanalysis. After completing her studies Bronstein came to England with a desire to learn about child psychoanalysis. She completed the Tavistock Clinic’s child and adolescent psychotherapy course, then trained as a psychoanalyst at the Institute of Psychoanalysis. Before qualifying, she began working at the Brent Centre for Young People, founded by pioneering adolescent psychoanalysts Egle and Moses Laufer.

Bronstein’s analytic writing is informed predominantly by the work of Sigmund Freud, the French school, and the Kleinian analysts. Egle and Moses Laufer have also had a significant impact on the development of her thinking and clinical career. Bronstein has always been open to a range of theoretical and clinical ideas, and ascribes this pluralistic approach to her education in Latin America, which encouraged an attitude of curiosity about diverse theories of mind. Alongside the profound impact made by Freud and Klein, Bronstein has found inspiration in the work of Hanna Segal, Betty Joseph, Wilfred Bion, Herbert Rosenfeld, Madeleine and Willy Baranger, Jacques Lacan, and Julia Kristeva.

Bronstein has published numerous papers and books, and sees writing as a vital aspect of analytic work; a means of making sense of what is encountered in clinical sessions, and of trying to define and model it in a coherent way. In the writing process, inchoate ideas must acquire internal coherence and lucidity, and the result of this effort in turn aids the clinical work, in a mutually enriching dynamic. This on-going act of articulation and clarification is, in her own words, “hard work, but tremendously interesting”. She finds that publishing also facilitates a dialogue with other analysts, from the same or different schools of thought.

Bronstein has written on a variety of subjects, including Melanie Klein and Wilfred Bion, psychosomatic phenomena, adolescent pathology, the place of the body in psychoanalysis, and issues related to female sexuality. She has also explored the role of delusion and hallucinations, and their connection to early anxieties, unconscious phantasies and symbol formation. In 2001 she edited a major review of Kleinian theory, Kleinian Theory: A Contemporary Perspective (2001), the result of years of organising the Kleinian module of UCL’s Psychoanalytic Studies MSc. This book has been translated into Spanish, Hebrew, Polish and Japanese. In 2015 she co-edited a book on Klein and Lacan with Julia Borossa and Claire Pajaczkowska, The New Klein-Lacan Dialogues, and most recently has co-edited a book on Bion with Edna O’Shaughnessy, to be published in 2017: Attacks on Linking: Revisited. She is currently co-editing a book with Christian Seulin on Freud’s 1919 paper, ‘The Uncanny’ [‘Das Unheimliche’], which will be published in 2018.

One of Bronstein’s central interests is psychosomatics. Her first published psychoanalytic paper was on facial neuralgias and their relation to depression. In 2011 she published an illuminating comparative overview of a range of analytic approaches to the fascinating subject of psychosomatics. Deftly summarising the thinking of the Paris school, the British Kleinians, Winnicott, Bion, Balint and Bick, among others, the paper is broad and probing. Bronstein has also written about the different ways in which unconscious early phantasies are manifested in the analytic session, particularly via those modes of expression not mediated by speech. She believes that an analyst must be highly attuned to these non-verbal manifestations through the countertransference. In her 2015 paper, ‘Finding Unconscious Phantasy in the Session: Recognizing Form’, Bronstein teases out the complex dynamic between analyst and patient, and the ways in which the bodies of analyst and patient are implicated in the transference and counter-transference.

In literature and film Bronstein has found deep sources of stimulation, often encountering in them ideas highly pertinent to psychoanalysis, such as the self and other, dreams, and unconscious phantasy. Her own analytic writing has often investigated these areas, and her interest in the fiction of Jorge Luis Borges led her to write a paper on his short story, ‘The Circular Ruins’. In ‘Borges, Immortality and the Circular Ruins’ (2002), Bronstein examines how the great Argentinian writer, “plays with fact and fiction, the real and unreal, illusion, time and death”. Philosophy also exerts an important influence on her thinking, and Jean-Bertrand Pontalis, who was both an analyst and a philosopher, appears often as a point of reference in her writing.

Ever since her child and adolescent psychotherapy training at the Tavistock, Bronstein has worked extensively with adolescents, at the Brent Centre for Young People and beyond. This work has had a deep impact on her, and she believes that working with adolescents as they suffer extremely painful, sometimes catastrophic, psychic changes is also very important in understanding the emotional distress of adult patients. In encountering what the Laufers called “psychotic functioning” in disturbed adolescents, she has deepened her understanding of the relationship between phantasy and reality, and the importance of paranoid and persecutory anxieties in connection with sexual development.

As a teacher, lecturer, and conference speaker and chair, Bronstein travels frequently and widely. Teaching internationally is an important part of her work, and for many years she coordinated a group for the Forum on ‘Listening to Listening’ chaired by Haydee Faimberg at the European Psychoanalytic Federation (EPF). She is currently on the organizing committee of the Adolescent Forum at the EPF. Bronstein was formerly the London Editor of the International Journal of Psychoanalysis (IJP), a role that further stimulated her curiosity about different analytic theories and approaches. In particular it encouraged her to question how one can compare different models of the mind in psychoanalysis, across different languages, cultures and schools of thought. She is still involved with the IJP as a Board member, and also sits on the International Psychoanalytic Association Publications Committee. Bronstein’s publications have been translated into many languages.

2016 Bronstein C. Bridging the Gap: From Soma-Psychosis to Psychosomatics. In Levine, H. and Civitarese, G. (ed.) The Bion Tradition: Lines of Development. Karnac. 239-248.

2011 Bronstein, C. On Psychosomatics: The Search for Meaning. International Journal of Psychoanalysis, 92:173-195.

1997 Bronstein C. Technique and Interpretation in Klein. In Burgoyne, B. and Sullivan, M. (ed.) The Klein-Lacan Dialogues. London, Rebus Press.