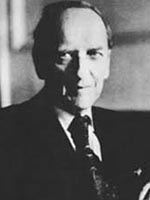 Charles Rycroft (1914-1998) began his analytic training (alongside his medical and psychiatric training) with the British Psycho-Analytical Society in 1937; he qualified as an Associate Member in 1949, a Full Member in 1952, and became a training analyst and a member of the Training Committee in 1954.

He was analyzed by Ella Sharpe and, following her death, by Sylvia Payne in an analytic lineage that dates back to Hanns Sachs, and was supervised by Marion Milner, whose clinical thinking he valued no less than what he saw as her warmth and distinctive approach to the irrevocable uniqueness of the patient. He consulted Milner on matters of difficulty throughout his life.

Rycroft produced a considerable body of theoretical work, in the second half of the twentieth-century, in the Independent tradition of British object-relations theory. A complete bibliography, extending over almost 40 years from 1951 to 1990, is included in his final collection of essays Viewpoints (1991). The list includes two book-length studies, Anxiety and Neurosis (1968), an attempt to explain psychic phenomena in biological terms (including the adaptive nature of anxiety), and the book he valued most amongst his works, The Innocence of Dreams (1979); three volumes of essays, Imagination and Reality (1968), Psychoanalysis and Beyond (1985), and Viewpoints (1991); a critical monograph, Reich (1971); and, perhaps his best-known book, A Critical Dictionary of Psychoanalysis (1968; revised with a new Introduction in 1995).

As Margaret Arden (2000, p. 1022) pointed out in her obituary in the International Journal of Psychoanalysis, every paper Rycroft wrote contained “significant original ideas”. And yet it could fairly be said that his contribution to psychoanalysis has received limited critical attention, that he has remained “steadfastly little known…in the world of psychoanalysis” (Bourne, 2010, p. 155). The general attitude of indifference towards his work, particularly from analytic colleagues in Britain, may be seen in the context if his own disaffection with the institution of British psychoanalysis. His critical views about the Society’s factionalism, the deleterious effects of charisma and ablation in analytic training, as well as the general intellectual insularity of the Society were well-known and, after a protracted period of ‘strategic withdrawal’, in 1978 he eventually allowed his membership to lapse. He didn’t write any more clinical papers thereafter; as some would have it, Rycroft ‘outgrew’ psychoanalysis and, indeed, he seems to have met with the fate of previous secessionists. Nevertheless, while keeping his distance from the Society, he retained active links with the 1952 Club, an independent group of which he was a founder member with Pearl King and Masud Khan. His clinical work also continued apace, and he carried a considerable workload as a practising psychotherapist (as he preferred to call himself) and writer until a week before his death at the age of 83.

Rycroft’s work has not been completely neglected, however. Franco Borgogno edited a Special Issues of the American Journal of Psychoanalysis in 2010 on Rycroft’s life and work, in which Jeremy Holmes (2010, p. 180) makes the point that “renewed interest in [Rycroft’s] writings is long overdue”. A general overview of some of Rycroft’s more important ideas, including his account of symbolization and of the role of support as well as interpretation as a mutative agent in the analytic situation, may be found in Rayner’s (1990) compendium of British object-relations theory. Peter Fuller’s 1985 Introduction to Psychoanalysis and Beyond repays close reading; Turner (2002) offers an incisive account of Rycroft’s contribution to the theory of illusion; and Pearson (2004) provides a useful, well-informed collection of papers on Rycroft’s life and work. In addition, Peter Rudnysky (2000) presents an interview with Rycroft in which he (Rycroft) underlines what may be seen as his fundamental perspective – namely, that “psychoanalysis is really about meaning and not about the causation of things” (2000, p. 74). It was the cries of ‘heresy’, when James Home put forward the hermeneutic perspective at a Scientific Meeting in 1965, which precipitated Rycroft’s gradual withdrawal from the Society.

While he speaks throughout his writings in a non-affiliated voice, this is not to say that his thinking was sui generis. On the contrary, his psychoanalytic thought was rooted in a rigorous critical reading of Freud, and he also acknowledged a debt to Milner and Winnicott. In fact, not unlike Winnicott himself in this respect, Rycroft formulated an unobtrusive but radical alternative to classical metapsychology. In Rycroft’s case, the alternative model is set out as a general theory of meaning, particularly with regards to the creation of meaning in language, along the related axes of imagination and communication.

In a series of works on the form and function of the imagination – most notably, ‘Beyond the Reality Principle’ (1962) and ‘Dreams and the Literary Imagination’ (1979; a revised version of his Freud Memorial Lecture at UCL in 1975) – Rycroft proposed: (a) that symbol formation is a general capacity of mind rather than a function of primary-process thinking; (b) that imaginative activity, including aesthetic judgement, isn’t modelled on neurotic functioning; (c) that the sense of reality is consistent with unconscious imaginative processes; and (d) that dreams aren’t analogous to symptoms on the model of wish-fulfilment, but that dreaming is rather a form of thinking in which the dreamer communicates with himself unrestrained by waking consciousness.

In conjunction with his ideas about the imagination, Rycroft’s theory of meaning also addresses what we do with words and what other people’s words do to us. Again, the theory rests on a number of basic propositions: (a) that communication is fundamentally an affective phenomenon; (b) that language communicates affect through signs as distinct from symbols; and, (c) that the essential work of analytic therapy, therefore, relies on unconscious inference, empathy and emotional responsiveness. The basic human need to communicate, starting with the infant’s cry, underpins Rycroft’s theory of motivation in which people are seen as motivated from the beginning of life by a need to make contact and form relationships with objects, rather than merely satisfying impulses in order to discharge energy. He elaborated these theoretical ideas in the context of the analyzing situation, emphasizing that interpretations are speech acts communicated between real, live human beings and, as such, that what analysts say to their patients matters less than how they say it.

Pearson, J. (ed.) (2004). Analyst of the imagination: The life and work of Charles Rycroft. London: Karnac.

Rudnytsky, P. (2000). A science of the mind. In Psychoanalytic conversations: Interviews with clinicians, commentators, and critics, Hillsdale, NJ. and London: Analytic Press, pp. 63-80.