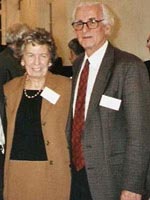 Moses Laufer  (1928-2006) was born in Montreal to parents who had emigrated to Canada from from Poland.

He lived  and studied in Canada,  eventually  trained as a social worker before going to Israel to work with immigrants there struggling to adapt to the new culture in which they found themselves. From Israel he came to England to train as an adult psycho analyst, working with adolescents in the East End while he trained.

The combination of youth work and psychoanalysis took him to Anna Freud’s Hampstead child  training, where his  encounter with Anna Freud proved extremely fruitful. She had written with great insight about the developmental strains  and defensive adaptations specific to adolescence, but had been pessimistic about the appropriateness of  psychoanalytic treatment, essentially arguing the conflict between the developmental task of adolescence itself, the giving up of the dependent relationship to the parents, and the regressive invitation of psychoanalytic treatment. In Vienna, however, Anna Freud had been drawn to psychoanalysts who were deeply engaged with adolescents, from August Aichorn and  Siegfried  Bernfield, to the teachers Peter Blos and Eric Ericson, who  eventually worked with her.

Moe Laufer, like those friends and allies of Anna Freud in her youth, cared  passionately about adolescents, and concerned himself with finding ways in which to apply and develop psychoanalytic understanding of the adolescent process in order to treat more effectively the adolescents themselves.  With  Anna Freud’s encouragement, and  eventually considerable material support,   he  set out to establish a treatment centre, specific to adolescents, in observation of their ceasing to be children, also separate from the adults they were in the process of becoming.

He succeeded in doing so, first at the Young People’s Consultation Centre, opening in 1961-2,  eventually establishing the Brent Adolescent Center in 1967.  The centres founders were Moe and Egle Laufer, Mervin Glasser, along with  Maurice Freidman and David Wohl.  At Brent,  psychoanalysts came together to treat  adolescents,  who were invited to “walk in” to a consultation center and there  begin a diagnostic  process offering containment, and the opportunity to identify and reflect on fundamental anxieties.  When appropriate, the analyst and the adolescent would work together toward a  transition to psychotherapy or psychoanalysis.

At the same time Moe Laufer  set out to deepen  the psychoanalytic understanding of adolescence itself, and to establish a theoretical foundation for the psychoanalytic treatment of adolescent patients.  The Brent adolescent centre became a centre for research.   Moe Laufer’s great contribution to psychoanalytic theory derives from the  study  of adolescent development.  According to his analysis,  the fundamental task of adolescence is the integration of the adult sexual body,  all other difficulties, with study, work, separation from home,  derive from problems in integrating the changing body.     In the 1970’s in England, where the study of early object relations had taken the center stage of clinical and theoretical research, and when the body was often dismissed as if it was not  inextricably linked to the development of  mind,   his was a brave and independent trajectory.

The fundamental focus of Mo Laufer’s theory is expressed in papers he has written, for the Psychoanalytic Study of the child, and the International Journal of Psychoanalysis, and most thoroughly in the book published in 1984, co authored by his wife Egle Laufer, Adolescence and Developmental Breakdown  Here, as elsewhere he begins with the physical event, physical sexual maturity, the transformative event to which the psyche must adapt, the failure of which defines the specifics of adolescent breakdown.  Adolescent breakdown, defined by Moe Laufer, is the breakdown of a developmental process.  As stated in the preface to the 1984 book, “the outcome of such a break must be  a distorted relationship to oneself as a sexual being, a passive relation to the parent of the same sex, and the giving up of the wish or the ability to leave infantile sexuality behind.”

At the heart of  the breakdown in relationship to the changing reality of the body is the unconscious fantasy that precedes and informs  the changes that take place at puberty, the “central masturbation fantasy”.   This fantasy is  the product of the task of the oedipal resolution of infantile sexuality, and in particular, the sexual identifications, ultimately, the fantasy of self and other. The adolescent breakdown takes place when the regressive elements in the central masturbation fantasy are too powerful, too conflicted,  cannot be integrated with the reality of the changing sexual body. Therefore, what “ differentiates one form of pathology from another in adolescence is the underlying fantasy that is being lived out and gratified,  the extent and the quality of the regression that is interwoven into the specific pathology, and the fantasied nature of the link to the incestuous parent”.  The argument with the adult body is the essential focus, manifest often in attacks, including suicidal attacks on that sexual body.   Because the adult sexual body represents reality, the break with it is often manifest in psychotic symptoms, symptoms which carry a different significance in adolescence than later.  In Laufer’s vision, the analyst of the adolescent has a specific task, which is to be vigilant to the regressive pull which draws the adolescent away from the adaptive task.