This is a clearly and concisely written book about patients who are very difficult to reach. Its great strength lies in the way that Steiner convincingly brings together detailed clinical description and the theoretical concepts informing his work. Although drawing centrally on Melanie Klein’s concept of projective identification, and on recent Kleinian developments, this is by no means a piece of work which will be useful only to those who work daily with Kleinian concepts. Meaningful links are made to the work of other authors and the whole emphasis is on the ‘fine grain’ of maintaining close contact with the patient’s need to involve the analyst in creating psychic retreats,- sanctuaries and bastions against unwanted and painful reality. There are findings here which will be of use to practitioners of different orientations. The book begins with an outline of the theory of psychic retreats as being manifestations of underlying pathological organisations of the personality. In three chapters the account is extended to include more detailed clinical examples of how these processes operate. Steiner reviews the specific kinds of mental pain evaded by subordinating oneself to these organisations. Essentially both depressive and persecutory anxieties are avoided, but at a devastating cost.

In Chapter 4 Steiner extends his review to work done on narcissistic structures, and in the following chapter he discusses the important role in movements towards recovery of what Bion has called "projective identification in reverse’. This is a very interesting discussion of the likely processes involved in psychic repair, linking the recovery of parts of the self lost through violent omnipotent attacks on thinking with the work of mourning. This theme is picked up again in Chapter 7, and there is an intervening chapter in which problems of psychotic catastrophe are explored.

In Chapter 8 Steiner discusses perverse aspects of psychic retreats, making connections with Freud’s ideas concerning fetishism, and in the following chapter he follows this up to explain how the hold of the psychotic part of the personality is strengthened by perverse, lying relationships forged between disparate parts of the self. There is then a description of psychic retreats found in literature, from the Oedipus stories. Particularly interesting here is the notion of ‘turning a blind eye’ as an important perverse mechanism, permitting psychotic retreat from reality by allowing a simultaneous acknowledgement and disavowal of the truth of an experience.

In the final chapter Steiner concludes with a discussion of technical problems relating to the nature of interpretations and how they are likely to be received by the intensely frightened and hostile patient, who fears the abrupt and permanent loss of the psychic retreat. In this chapter Steiner offers some ideas which are of real help to the beleaguered analyst or therapist in his or her attempts to stay with the patient, and to understand more clearly ‘what the stakes are’ at critically difficult points in the work. Although John Steiner’s ideas have largely been honed in his work with severely damaged individuals, a major aim of this book is to assist us in recognising similar, less extreme variations in less disturbed patients, so that we might better understand what is going on, and be more open to those moments in which we become drawn in to supporting the patient’s pathological organisation. I think this is a major strength of this book and I wholeheartedly recommend it to a wide readership. 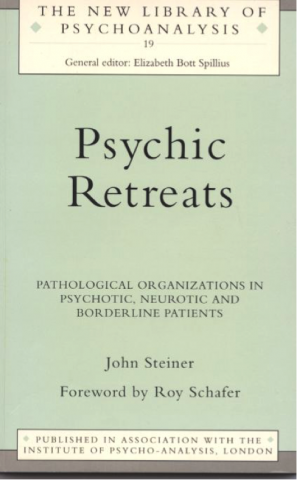