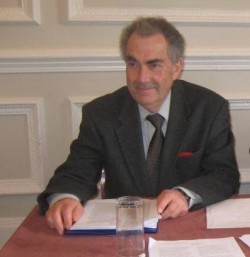 Michael Feldman has made some notable contributions to psychoanalytic theory, but he is known above all for his keen and sensitive clinical insight.

Acknowledging the influence in particular of Betty Joseph, Herbert Rosenfeld and Hanna Segal, drawing on the clinical insights of Wilfred Bion, as well as Kleinian contemporaries Ron Britton and John Steiner, he has developed a style of working that places a specific emphasis on sensing what is alive in the session, following minute by minute the interaction between patient and analyst.

Feldman, who was born in South Africa, studied medicine and psychology, and was until 1998 consultant psychotherapist at the Maudsley Hospital in London. He is a training analyst in the British Psychoanalytical Society.

As a teacher and supervisor his colleagues value Feldman for his modesty, warmth and humour – together with a certain conviction that underlies, perhaps even underpins, his willingness to entertain doubt.

Counter transference of the analyst

Feldman has a particular interest in the counter transference of the analyst, as indicated in the title of his book, Doubt, Conviction and the Analytic Process, a selection of his papers published in 2009. In several papers this is given sustained and searching attention. Building on the work of Betty Joseph, Feldman also proposes a broader and deeper concept of transference, which is understood as much more than the re-living of earlier experience, or the projection into the analyst of aspects of early internal objects or object relations.

In every session the encounter between patient and analyst is conceived of as an instantaneous impact, as it were, of phantasies, desires, fears, setting the scene for events in the session as it unfolds. This encounter, says Feldman, is the 'emotional storm’ that Bion refers to in his 1979 paper ‘Making the best of a bad job’ (1). Bion wrote, ‘One does not immediately know what the emotional storm is, but the problem is how to make the best of it.’ In his own paper entitled ‘I was thinking …’ Feldman writes of ‘the patient’s attempts to deal with intense, often quite primitive emotions provoked by the immediate contact with the analyst’. For his part, the analyst must deal with ‘powerful and disturbing phantasies that are evoked in him by the patient’s projections’. He thinks that the analyst, for his own reasons, may find himself colluding with attempts by the patient to avoid contact with these disturbing experiences.

In his paper ‘Projective identification: the analyst’s involvement’, Feldman discusses ‘the nature of the involvement by the analyst that the patient seems to require as an essential component of the defensive use of projective identification’. Thus, he believes, the analyst makes a mistake if he tries to assume the role of ‘dispassionate observer’ of his patient’s defensive system. Indeed he cannot: involvement, and therefore enactment, are inevitable. His task is to sense and to elucidate as far as he can, the interactive processes in the moment.

Feldman’s scrutiny of the analytic interaction is always the focus of his interest. In discussing clinical work with colleagues, he places a special value on sensitive and frank counter transference introspection. It follows that he is not essentially searching for the ‘correct’ interpretation. I believe he considers that quest is liable to close one’s mind to the creative experiencing of the moment. He is more concerned to foster flexibility in the analyst’s attention to the evolution of transference/counter transference phenomena of each moment of the session.

A counter transference experience familiar to every analyst is doubt, the complexities of which are a particular interest, as the title of his book reveals. Again, he is interested less in whether the analyst’s sense of conviction about his understanding is well founded, or whether his feeling of doubt or confusion is justified. What Feldman wants to pursue here is the danger of rigidifying what he insists must remain fluid. He writes:

"What I will argue is that if analysts believe they have arrived at a particular place, reflected for example in the notion of having hold of a ‘selected fact’ (2) this can itself become an overvalued idea, rather than a useful way of organizing and integrating their observations and experiences for the time being. Conversely, while it may be useful to recognize a state of doubt, if the formulation that arises out of this recognition is itself seized upon and treated as a fact, a defined and hence static mental state, analysts’ flexibility and openness are restricted."

Dynamics of the patient/analyst relationship

Pursuing this idea, he gives weight to the effect of the formulation of an interpretation not only on the patient, but also on the analyst. The effect on both is likely to bring about ‘an important dynamic shift – a modification of the patient’s introject of the analyst and the relationship’. ‘There is danger’, he says, ‘that the analyst perseveres in trying to engage with the patient present at an earlier point in time, and the analyst present at an earlier point in time.’ He quotes Heraclitis: ‘No man steps in the same river twice. For it’s not the same river, and it’s not the same man’.