This is an introduction to the factors which develop or inhibit the mind in all stages of life, from a psychoanalytic point of view. The book traces the interplay between influences - internal and external - which contribute to a person's character strength and sense of identity. 192 pages. This second edition of the remarkable Inside Lives (expanded with a chapter on the last years of the life cycle) provides a perspective on the relationship between psychoanalytic theory and the nature of human development which has not been available in written form. Following the major developmental phases from infancy to old age, the author lucidly explores the vital aspects of experience which promote mental and emotional growth and those which impede it. In bringing together a wide range of clinical, non-clinical and literary examples it offers a detailed and accessible introduction to contemporary psychoanalytic thought and provides a personal and vivid approach to the elusive question of how the personality develops.

‘The difficulty I have found in reviewing is that it is hard to adequately convey the scope, the richness, depth and literary beauty of this book.’ - Journal of Child Psychotherapy.

This book is the sixth in the clinical series published by the Tavistock Clinic under the general editorship of Margot Waddell and Nicholas Temple. The series reflects the range of clinical and theoretical work which has been most influential at the Tavistock Clinic and this contribution is very much in the tradition for which the Tavistock has become well known, the Kleinian and post-Kleinian tradition. Waddell says that her aim is to ` illuminate not so much the developmental milestones [as] the growth of individual consciousness, so elusive a thing as development, the moral and emotional growth of the self, the character`. She also hopes to shed some light on post-Kleinian theories as she describes these processes. Margot Waddell is also known for her interest in and writing about  the relationship between psychoanalysis and literature[1]. This book is especially rich in references to, and uses of the Romantic tradition in English literature as applied to this aspect of psychoanalytic thinking about development. It is very much a book about morality; the good life or at least the sort of life which could be said to be making the best of what one is given. The text is beautifully written and engages the reader with ample clinical vignettes, and quotations and references to poetry and prose. The way Waddell writes certainly brings her theoretical thinking and clinical practice very vividly to life.

Although the book is arranged chronologically, from “beginnings” in prenatal life to “later years”, this belies the author`s thesis that states of mind transcend developmental phases and that they are capable of being experienced irrespective of age : “An adult`s state of mind may be found in the baby; an infant`s in the adolescent; a young child`s in the old man`s; a middle aged man`s in the latency boy”( page 8). By states of mind Waddell means those which prevail according to the classical Kleinian theory of “positions”- paranoid schizoid and depressive. They are said to exist from early infancy and to be available then throughout life.  The theory of positions rather than stages of development “constituted a significant shift within psychoanalytic understanding….away from the explaining and curing of discrete symptoms and towards one in which developmental possibilities are traced in the person as a whole, in relation to their prevailing mental states”. (page 6)

The use of a chronological  sequence in the book, suggests that the author does have a view that time and maturation play a part in the development of the personality. She does refer to different kinds of mental structures e.g. infantile and adult, which also suggests that time takes its toll, or alternatively ageing reaps its rewards; which brings me to the paradox of the book. States of mind exist in the body which is subject to the irreversible process of ageing. If states of mind transcend developmental phases then we must conclude that they do not incorporate the facts of physiological maturity and ageing. It could be said that the structures of mental states are not influenced by these facts, but their content may be. If that is the case, how can one talk about “growth of the personality” unless states of mind somehow embrace the uni-directional “arrow of time”, which  is based on  the irreversibility  of physical processes? Imagine trying to un-break an egg. According to the author the “later years” is the only  period in life  where age provides an “essential difference”, separating it out from other periods, and this to do with the reality of death which must be faced in one way or another.  Surely there are many “essential differences” throughout development which radically alter the impact of states of mind or indeed,  the experience of the external world. One such example is adolescence when the arrival of the sexually mature body  faces the individual with essentially different and new developmental tasks. Another  is young childhood, classically known as the anal phase, when control of one`s own body has immense consequences for self-experience as well as one`s relationship with the outside world.  It is this reader`s view that “the arrow of time” means that  work is constantly being demanded  of the mind  to take account of changes that ensue, consequent upon the developmental process. Too often in this book, there was a tendency  to express the developmental tasks of each phase as the paranoid schizoid -depressive position dilemma, and this could read  as very reductionist at times.

An aspect to Waddell`s account of development which I found refreshing was an implicit shift in Kleinian understanding of  development ( and also psychopathology) away from an entirely subjective account towards a more inter-subjective one. This  seems to be attributed to the influence of Bion and his theory of the “container-contained”, which is referred to throughout the book. However in my view, it is more Waddell`s own, as is demonstrable in the clinical vignettes  which are powerfully descriptive. Almost, if not all of her examples contain elements in the history, of disruptions in the caretaking environment which are implied to be significant in the aetiology of the disturbance in development.  John Bowlby used to tell the tale of his supervision of his first child analytic case with Melanie Klein. The child`s mother was hospitalised following a psychotic breakdown and Bowlby apparently went along to his next supervision and relayed this to Mrs. Klein. She is purported to have said that this should be of no interest to him as a trainee child analyst; all he should be concerned with was the inner world of the child. Bowlby`s break with Klein, and his subsequent research into the effect upon development of real separations from primary caregivers, is now history. Waddell is reluctant to chronicle this shift in Kleinian clinical thinking as being in some way the result of the impact from other non-Kleinian traditions e.g. her claim that Mrs Klein “understood the utterly dependent infant….”  is actually a conflation of Winnicott with Klein. It was Winnicott who, in answering Klein, emphasised the absolute dependence of the infant at the beginning of life. This enabled him to have an inter-subjective account of development from the beginning, which was eschewed by the Kleinians. Indeed although the author does refer much to Winnicott in the text, it is as if his thinking was in the post Kleinian-Bion tradition, and this was not the case. Winnicott`s thinking about mothers and infants was very different from Bion`s. Winnicott`s emphasis on the “facilitating environment” set him apart from many other psychoanalytic  thinkers of his day, presaging the knowledge to be gained later about the impact of the caretaking environment upon development, from other disciplines such as developmental psychology.  Winnicott`s “holding” is not Bion`s “containment”.

It is  not for a critic to criticise an author for writing the book they have written  because they have not written the one  the critic would have liked to have done themselves.  However I do think that by confining herself to the Klein and post-Kleinian tradition, Waddell limits the scope of  her book unnecessarily.  In addition to the conflation of Winnicott with Klein, Waddell omits salient authors from other traditions within the psychoanalytic frame, a discussion of whose work would have fruitfully expanded this volume. Her chapter on adolescence is a case in point, where Klein is  said to be very largely responsible for the “ notion that adolescence [provides] a necessary period for restructuring of the personality” (p126) It is a pity that the seminal work of the Laufers on adolescence and the  requirement to incorporate the fact of the sexually mature body into the mind, is not referred to here.

I found this book  immensely stimulating, challenging me to examine my own biases and assumed truths, and always  a pleasure to read. I recommend it to all who have an interest in understanding the processes of human development from the inside. 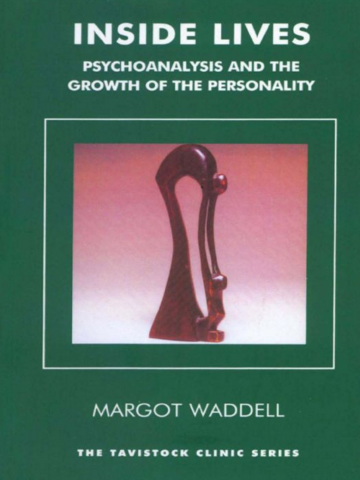