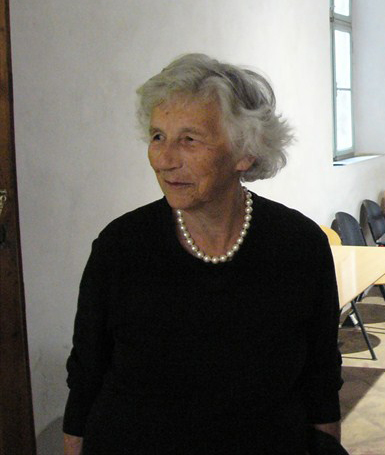 Anne-Marie Sandler (1925-2018) was a training analyst in adult, adolescent and child analysis and a Distinguished Fellow at the British Psychoanalytical Society.

Anne-Marie Sandler was born in December 1925 in Geneva where she lived until she moved to London in her twenties. In Switzerland she worked with Piaget and this included carrying out research for UNESCO on children’s developing notion of homeland and foreignness. Between 1950 and 1954 she trained as a child analyst at the Hampstead Clinic and then between 1965 and 1968 as a psychoanalyst at the British Psychoanalytical Society.

Some months before she qualified in 1954, Anne-Marie was given the opportunity to work at the Hampstead Clinic on a project set up by Anna Freud with a small group of young children who were congenitally blind. Besides running a day nursery for blind children, they undertook the analytic treatment of these children, discussed their development with their mothers and visited them in their homes. The many observations they recorded formed the basis of the papers that she published by herself as well as with D. Wills. They indicated their findings that children who are born blind from birth show a degree of fixation to the very earliest phase of development during which the passive experience of bodily gratification is dominant. The degree to which progress towards mastery of the external environment can be made was seen to be a function of the degree of skill inherent in the maternal care which they received. At the time when the sighted baby increasingly uses his hands to discover and explore new sources of stimulation, and to organise and differentiate his world, the blind baby meets with many difficulties in this movement forwards. Not only are reaching and localising difficult to achieve without sight but the lack of vision also makes the world of inanimate objects much less interesting. Such babies are much more dependent on their mothers for this movement outwards.

At the age of around 6 or 7 months the mothers of these blind children went through a period of depression because they experience their babies as unresponsive to them. Progressively, it was possible to identify that the responses of the babies to their mothers was based on cues provided by sound, touch, smell and taste. Thus the blind infant may lie quite motionless when listening to the mother. They often also presented a movement with their hands while listening. This immobilization was an attempt to listen to their mothers as carefully as they could. Once the mothers could understand that both their immobility as well as movement of the hands was a response to their presence they would in turn respond and create a bond that was not there before. The relevance of the exploration of the maternal body was emphasized, from which the babies could move on to explore the external world.

“Beyond Eight-Month Anxiety” (1977) has become a classic work. Anne-Marie presents clinical material from an adult psychoanalytic case in order to demonstrate a striking correspondence between an adult mode of functioning and the 'stranger anxiety' of the infant. The paper explores the role of the ‘refuelling dialogue’ in which the infant scans the environment for sensory and affective cues, which can provide him with a sense of security. Mutual signals in the mother–child dialogue are crucial for the establishment of organized and cohesive object and self-representations. In the normal child, satisfactory past experiences within the mother–child dyad create a feeling of basic trust. Some children, however, like her adult patient Mrs B., are so afraid of dissonance consequent on the perception of the strange and the threat of losing the object or the object's love, that they have to cling to the mother, to scan her and their relationship to her, for frequent refuelling.

Anne-Marie published a number of seminal papers with Joseph Sandler in which they reviewed basic psychoanalytic concepts. Their paper on the “three box model” is a reassessment of the links between the topographical and structural models of the mind. It has implications for a theory of technique: “The implicit rule in this can be expressed as follows: work with the resistances due to the second censorship before anything else, and make your reconstructions later, when these resistances have been substantially diminished or resolved” (1983, p. 424).

Internal Objects Revisited is a testimony to the impressive creativity of the Sandlers’ collaboration and offers an integrating frame of reference bridging theory and clinical process, as well as providing a template for interpretation, construction, and reconstruction in analysis. The book is a masterful project of integration of their contribution to psychoanalytic theory and practice over many years, an integration of drive theory with object relations theory emphasizing the centrality of feeling states for the understanding of transference and countertransference in the analytic process.

A key organizing concept permeating the book is that of role-responsiveness. Patients in analysis attempt to recreate, in the here-and-now of the analytic situation, an “identity of perception” with the phantasized and wished-for object relationship: “pressures are placed upon the analyst to make him conform to an unconsciously wished-for role”. Paralleling the analyst’s free-floating attention is a “free-floating responsiveness”. These enactments can provide useful information about the “wish-fulfilling object relationship that the patient is unconsciously trying to actualize in the transference”.

Anne-Marie emphasized the sensitive monitoring of the transference and countertransference in order to assess the level at which her patients are functioning. Her deep understanding of human nature and of “the child within” her patient had been expressed in her way of practicing psychoanalysis: she stressed the part played by feelings of well-being in the regulation of mental functioning. In any supervision or clinical discussion, Anne-Marie understood the core of what the patient is struggling with. This was associated with an inner modesty that is in marked contrast to the inspiration that she so generously offered.

Anne-Marie had a unique capacity to establish bridges between people and traditions, and she has been an influential teacher and supervisor. With her compassion for her patients, her sharp intellect, and her clarity of thinking, she was one of the most popular supervisors for the training and fellowship of the British Psychoanalytical Society.