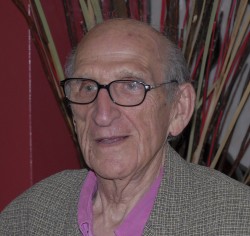 Leslie Sohn (1919-2013) was born in Cape Town, the youngest of three children, having two sisters several years older. He attended the local public day school and then read medicine at the University of Cape Town.

His attachment to the psychiatric department of the university hospital produced clear signs of a profound interest in this field. He completed his House Officer posts in Durban and waited for the war to end before coming to England for post-graduate training in psychiatry.

Dr Sohn was delighted to be appointed Senior House Physician in 1947 to Aubrey Lewis at the Maudsley Hospital. In 1948, with the forming of the National Health Service, his attachment became one of Registrar and then, Senior Registrar. The word ‘psychoanalysis’ had not yet entered his vocabulary. Whilst working at the Maudsley Hospital, he was fortunate to work clinically for Clifford Scott and William Gillespie who inspired his psychoanalytic interest. He was encouraged to apply to the Institute of Psychoanalysis, was accepted and supervised by Marion Milner and Hannah Segal, qualifying in 1952. Two of his peers during the training were Sidney Klein and Isabelle Menzies-Lyth with whom he maintained a friendship over several decades. They continued to meet regularly at postgraduate seminars, including over a period of 12 years at the Rosenfeld seminar, where Sohn and Klein presented. A similar pattern took place at the Segal post-graduate seminar over many years.

Throughout this time, Dr Sohn continued working at the Maudsley Hospital and, post-qualification as a psychoanalyst, began to develop his private practice. He also completed the Child Psychoanalytic training. This he found difficult as he had the same supervisor for each section of the training “and I can’t claim that we got on well”.

During this time, Dr Sohn assessed and treated hundreds of patients and supervised and inspired hundreds of juniors, from medical and other disciplines, excelling as a clinician and teacher. In particular, his attachment to the Medium Secure Unit at the Bethlem Royal Hospital (Dennis Hill Unit) revolutionised the way of thinking and understanding violent behaviour in mentally disordered offenders and in particular, those suffering from psychotic illnesses. His paper ‘Unprovoked Assaults’ was particularly influential in providing a way of understanding the apparently inexplicable, sudden and often bizarre, violent offences carried out by mentally ill patients, indicating that there was indeed a provocation, albeit a complex psychical one arising from traumatic historical events, where the victim of the assault becomes a suitable external recipient for the extreme projections that are enacted bodily through the violent act.

He especially enjoyed working alongside colleagues in forensic psychiatry, Dr James Mc Keith, Professor John Gunn and Professor Pamela Taylor. He was a pioneer in developing a highly sophisticated form of peer review for forensic mental health clinicians at all levels of seniority. He published several papers in the International Journal of Psychoanalysis. One of his most interesting and useful theoretical developments has been that of considering a mad part of the psychotic patient’s superego envying what goes on between patient and analyst and repeatedly attempting to ‘assault’ the therapeutic process. His repeated reminders to clinicians working in forensic psychiatry settings of the constant need to watch out for “collusions with delusions of sanity” has had a major impact on the training of clinicians from different disciplines as well as ameliorating the care provided to patients in these settings, where there is a strong tendency for such collusions to arise. This has also had repercussions in risk assessment and management of patients who have been violent.

Dr Sohn had four children with his beloved Myra, who died in 1995. He was a real family man, spending his free time with his four children, nine grandchildren and five great-grand children.