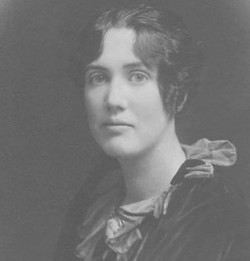 Although her contributions have not been adequately recognised, Joan Riviere (1883-1962) contributed much to psychoanalysis.

Through her innovative writings and teachings she originated many themes in psychoanalytical thought that continue to be explored today. Her literary style was such that she could present and interpret Melanie Klein’s writings ‘with a vividness that I think neither Mrs Klein nor any of her collaborators achieved’ (Hanna Segal, ‘Foreword’, Joan Riviere: The Inner World and Joan Riviere, Hughes, 1991). Freud was most appreciative of her ability to translate his works in a manner and with a sensitivity that surpassed those of others.

Early life and introduction to analysis

Riviere was born in Brighton. Her father was a solicitor with an important literary background. She was not so close to her mother who had been a governess and, as such, taught the young Riviere herself. She was not happy at the school she later attended, Wycombe Abbey. She then went for a year to Germany where she learnt the language so well that several years later she was able to translate Freud’s work with such skill. She was married in 1906.

Since Riviere was emotionally close to her father, his premature death in 1909 was so upsetting to her that she spent several periods in nursing homes. These emotional difficulties led her to psychoanalysis with Ernest Jones in 1916. Jones did not deal sensitively enough with her positive transference and involved her in several of his personal situations. This led to Jones referring her to Freud. Her analysis with him took place in Vienna in 1922.  Freud understood Riviere better than Jones had but the analysis was very short. Riviere told Herbert Rosenfeld that she resented the fact that Freud thought of her as a translator rather than as a patient.

Although the analysis with Jones was not successful, he had appreciated Riviere’s remarkable understanding of the analytic process and he referred patients to her.

On her return to London Riviere became an important member of the British Psycho-Analytical Society. She became a training analyst in 1930 and analysed among others John Bowlby, Susan Isaacs and Donald Winnicott.

Riviere played a significant role in relation to the development and expression of Melanie Klein’s ideas and made several bold and original contributions to psychoanalytic theory, the most significant being ‘A contribution to the analysis of the negative therapeutic reaction’ (1936). In this paper Riviere incorporated Klein’s findings relating to the depressive position, describing for the first time the concept of a defensive organisation seen as a protection against psychic pain. This highly organised system of defence against the unconscious depressive condition serves as a disguise to conceal the latter. The idea of an organised system of defence has commanded the interest of succeeding analysts.

‘Womanliness as a masquerade’ (1929) examines an area of sexual development in which the femininity of certain women can be found to be a mask that is used to hide rivalry with and hatred of men. Fraudulent femininity covers a wish for masculinity that must be hidden out of a fear of retribution. In this paper, Riviere demonstrates with convincing clinical material a fraudulent femininity in a certain type of woman, not overtly homosexual, but not fully heterosexual. Riviere traces the roots of the homosexual development in women to frustration during sucking or weaning which gives rise to intense sadism towards both parents, particularly the mother. She describes this in her paper, ‘Early stages of the Oedipus conflict’ (1928).

Later, in ‘Jealousy as a mechanism of defence’ (1932), Riviere gave a broader understanding of the complexities of women’s sexual development. She makes an original contribution here in understanding and demonstrating that it is oral envy that leads the morbidly jealous woman to search for unattainable love and to feel deprived. She describes the spoiling that underlies Oedipal jealousy. In this she is paving the way for Klein’s work on Envy and Gratitude (1957).

While Riviere greatly admired Freud’s capacity to explore the unconscious, she took him to task for his views of female sexuality and the way in which he ignored the little girls’ interest in men and her playing with dolls. Furthermore, she, along with other writers, took Freud to task for his denial of both the young girls’ and boys’ awareness of the vagina. To him women were failed men. Although she was not directly involved in the emancipation of women, Riviere’s contribution to the understanding of the complexities of women’s sexual development came to be increasingly valued.

At the time of the Controversial Discussions in 1940, Riviere’s contributions were invaluable. Her ability to make complex theoretical insights persuasively straightforward helped to resolve the difficulties. Her ability to put Klein’s theories into the context of Freud’s discoveries is illustrated in her paper, ‘On the genesis of psychical conflict in earliest infancy’ (1936), delivered in Vienna in honour of Freud’s 80th birthday. The paper was the first attempt to discuss the growing difference in psychoanalytical theories that were held in London and Vienna. This was particularly the case as they pertained to the topics of oral sadism, projection, and introjection in infancy. It is the clearest and most beautifully expressed outline of Kleinian theory as it was at that time, lucidly describing the sufferings of infants and children as they struggle with their love and hate for their objects.

Riviere’s marriage to Evelyn Riviere ended with his death in 1945. Her paper on ‘The bereaved wife’ (1945) which was written about women who had lost their partners in the Second World War, reflects some of her own feelings at his death. She speaks in moving detail of the strain that such a catastrophe imposes, not only on the wife herself, but on her relationship to her children. She ends, reminding the reader that every woman was once a child, and that what every human being seeks to find again in life are the figures of the mother and father in the forms in which they have been ‘indelibly preserved in the depths of the mind.’

Reflecting on the arts

A highly cultured woman, Riviere was interested in literature, arts and the theatre. One of her last papers was ‘The unconscious phantasy of an inner world reflected in examples from literature’ (1952), in which she seeks to convey with examples from literature the ideas of phantasies ‘we all unconsciously create of harbouring others inside ourselves.’ She also wrote ‘The inner world in Ibsen’s Master-Builder’ (1952) which continues the theme of the inner world in literature. Here it is the figures and forces in the more abnormal inner world in which the Master-Builder, not having mourned his losses nor repaired his inner world, acts out instead, in a catastrophic way, his competitive phantasies in relationship to the internal parents and the parents’ children.

Joan Riviere died in London in 1962, survived by her only daughter, Diana.

1936 Riviere, J. ‘A contribution to the analysis of the negative therapeutic reaction’. International Journal of Psychoanalysis.17: 304-320.

1936 Riviere, J. ‘On the genesis of psychical conflict in earliest infancy’. International Journal of Psychoanalysis. 17: 395-422.

1952 Riviere, J. ‘The unconscious phantasy of an inner world reflected in examples from literature’. International Journal of Psychoanalysis. 33: 160-172.