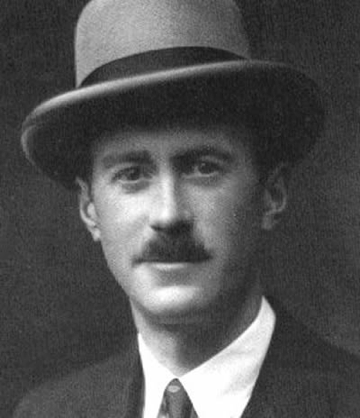 William Ronald Dodds Fairbairn was born in Edinburgh on 11th August 1889, the only child of Thomas and Cecilia Fairbairn.

He studied Divinity and Hellenic Greek at Edinburgh University, and in Kiel, Strasbourg and Manchester. He was from a religious family, and retained his own Christian faith throughout his life. Apart from his time studying overseas, and the years he spent fighting in the First World War, Fairbairn always lived and worked in Edinburgh. He is now widely known as the ‘father of object relations’, due to his important innovations and developments in that branch of psychoanalytic theory. He also wrote creatively and influentially about art, education, religion, politics and social issues. Throughout Fairbairn’s theoretical work, relatedness and relationships remain at the centre of human psychology and experience. Many consider his contributions to psychoanalysis to be profound and of immeasurable influence, particularly upon theoretical and clinical developments of recent decades.

After fighting in Palestine and North Africa for almost all of the First World War, Fairbairn decided to move away from his theological and philosophical studies, and into psychiatry. He entered immediately into his medical training, and qualified in 1924. Fairbairn’s experiences in the War had had a deep impact on him, and he would treat many ex-soldiers suffering from trauma and what were known as ‘war neuroses’ over the course of his career. While studying to become a psychiatrist, Fairbairn read the work of Sigmund Freud and Carl Jung, and began an analysis with recently qualified Australian psychoanalyst E. H. Connell, also a devoted Christian. Shortly after qualifying, Fairbairn began to practice psychoanalysis himself. He wrote his first substantial psychoanalytic paper in 1927, and attended the International Congress of Psychoanalysis in Oxford in 1929. Between 1927 and 1935 he lectured in psychology at Edinburgh University, specialising in adolescent psychology. Fairbairn also worked at the Clinic for Children and Juveniles, part of the University of Edinburgh, where he treated delinquent young people and those who had been sexually abused.

Between 1928 and 1930 Fairbairn explored Freud’s writings in great detail, making copious and thorough notes, and began to depart somewhat from Freud’s account of several core analytic principles: the structure of the psyche, the theory of instincts, and repression. Fairbairn was not satisfied with Freud’s structuring of the psyche, especially his description of the relationships between the ego, super-ego and id. He found a certain crucial illogic in Freud’s model and, some years later, would go on to make his own description of the tripartite structure in one of his most influential papers, ‘Endopsychic Structure Considered in Terms of Object-Relationships’ (1944).

In 1931 Fairbairn became an associate member of the British Psychoanalytical Society on the basis of his psychoanalytic writings to date (he became a full member in 1939), and in the mid-30s withdrew from his university position in order to enter into fulltime psychoanalytic practice. For many years he was the sole analyst working in Edinburgh, and had little contact with the life of the British Society in London. He submitted a short paper as part of the Controversial Discussions in the early 1940s, but generally worked in a state of unusual isolation and, indeed, with an unusual degree of independence. Many believe that this geographical and professional separateness from the Society contributed to the striking originality of Fairbairn’s concepts. Nevertheless, his ideas were deeply informed by his colleagues in London, and his work, in turn, went on to have a profound influence on British object relations theory, becoming one of the key figures of the Independent tradition.

In the 1930s Fairbairn became fascinated by Melanie Klein’s theories, particularly about child development. Klein’s 1932 book, The Psycho-Analysis of Children had a big impact on him, as did her 1935 paper, ‘A Contribution to the Psychogenesis of Manic-Depressive States’. Several years later Fairbairn wrote two papers on art and creativity, inspired by Klein’s account of innate destructive urges and their attendant desire for reparation and restitution. In turn, Fairbairn began to influence Klein’s thinking and that of her colleagues. His innovative, bold work in object relations paved the way for new theoretical and clinical approaches, though this contribution was perhaps not sufficiently recognised or acknowledged at the time.

One of Fairbairn’s major theoretical developments was his delineation of a psychological model of the mind, departing from Freud’s biological theory, in which the central assumption was that the libido is fundamentally pleasure-seeking. Fairbairn asserted instead that what is primary in us all is our search for relationships, and that this is more urgent than the desire to gratify instincts. Fairbairn describes a model wherein the libido does not seek simply to discharge energy via use of an object, rather that it seeks the object in and for itself. In Fairbairn’s thinking, instincts certainly exist and pleasure results from attaining a desired object, but pleasure is not the goal in itself. Therefore, the driving force in the human psyche is not in fact the pleasure principle, but a fundamental need to relate to and connect with other objects, i.e. other people. Fairbairn’s emphasis on the centrality of relationships in the psyche was a great inspiration to John Bowlby, and played a key role in the development of Bowlby’s famous ‘attachment theory’.

Fairbairn also found Freud’s classical method flawed with regards to the Oedipus complex. In Fairbairn’s experience, analysing the Oedipus complex in his patients did not always lead to a resolution of their problems, and this dissatisfaction led him to develop the theory of schizoid phenomena. 1940 saw the completion of Fairbairn’s first paper on this subject, ‘Schizoid Factors in the Personality’, and was the beginning of an immensely innovative and creative period. It was this paper – in which Fairbairn coined the term ‘schizoid’ – that would later inspire Klein to alter her ‘paranoid position’ to ‘paranoid-schizoid position’, and that would similarly have a considerable impact on Donald Winnicott’s thinking about schizoid states. This paper also marked the beginning of Fairbairn’s pioneering thinking about borderline states, and their origins in the ‘splitting’ process, a defence against the pain of being rejected by insufficiently attentive parents. Fairbairn’s conceptualisation of splitting was, and continues to be, a very influential contribution to psychoanalytic theory. He described the child splitting off the emotionally responsive side of his or her parents from the unresponsive side, thereby creating ‘good’ and ‘bad’ objects, and often also splitting the ego into ‘good’ and ‘bad’, a process often leading to borderline states. His development of a quite new theoretical and clinical approach to borderline states remains very important in the psychological treatment of such patients today.

Fairbairn died in his home city of Edinburgh on New Year’s Eve 1964, at the age of seventy-five.

Fairbairn’s Journey into the Interior, by John Sutherland (Free Association, 1989).