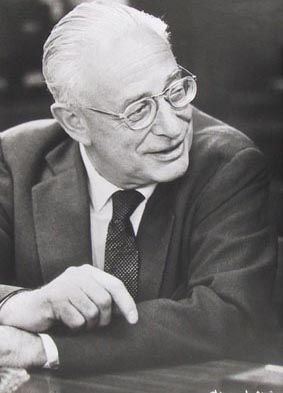 Michael Balint was born Bergmann Mihály in Hungary on 3rd December 1896 to a general practitioner father.

Later, against his father’s will he changed his name to Michael Balint. In 1919,along with Alice Szekely-Kovacs he attended Ferenczi’s inaugural lecture series as the first Chair of Psychoanalysis in Hungary, just before the overthrow of Bela Kuhn’s Communist Republic. Michael and Alice, now married, fled the counter-revolution to Berlin, where he worked in the biochemical laboratory of Otto Warburg, who would later receive a Nobel Prize (1931).

By 1922 the couple had both started analytic training with Hanns Sachs in Berlin, although Balint thought him too didactic. Returning to Budapest in 1924 both commenced analysis with Ferenczi for two years. It was in Ferenczi’s waiting room that Balint first came into contact with Melanie Klein

By 1935, two years after Ferenczi’s death, Balint became director of the Budapest Psychoanalytic Institute. Following the Anschluss of Austria in 1938 and aided by Ernest Jones they settled in 1939, not in desired London but in Manchester. Within a few months of their arrival, Alice died suddenly of a ruptured aneurysm. In 1945, Balint’s parents, who had remained in Hungary, committed suicide to avoid being arrested by the Nazis.

That same year, Balint made the decision to move to London and obtained a Master of Science in Psychology with a thesis entitled Individual Differences in Early Infancy. Tracing elements of Balint’s own traumatic landscape: a hand deformed by war, forsaking his father’s name, twice escaping from home and country, and the sudden death of his wife and both parents within a few short years -such traumata involving the self, the other and the environment, would become profound topics of debate in his subsequent writings, which were developed amidst the growing influence of early object relationships theory. Later, in practice in London Balint became a leading exponent of the Independent Group.

Balint continued Ferenczi’s research into themes such as the analytic setting, character analysis and, in particular, the role of the analyst in the analytic environment which culminated in his final and most important book on regression, The Basic Fault: Therapeutic Aspects of Regression (Balint, 1968). The other major strand of his corpus was the application of psychoanalytic thinking to the understanding of, and dialogue with, doctors in their interaction with patients.

Balint examined the process and the role of the analyst in establishing the character, range and depth of the project of the analytic pair. As Jacques Lacan noted, Balint focused on understanding the fundamental object relation “which he calls primary love, namely the relations between mother and infant” (Lacan, 1988, p.209).

Central to Balint’s conceptualisation is the idea of the ‘basic fault’, a term used to describe the relatively common experience in early two-person relationships that something was wrong or missing and that it has been carried over into the oedipal period (from 2-5 years old). Resolution of the ‘basic fault’ takes place through regression within the analytic setting, leading to the possibility of what he termed a ‘New Beginning’. Paranoia is relinquished and primary love is revealed as a form of love free of the quality of early aggressivity experienced by the patient.

For Balint, narcissism was always secondary and thought that archaic object-love was only underdeveloped, such that the analytic task was to assist its growth. Narcissism, depressive and paranoid attitudes each function as a defence against the other. Later which led to Balint theored that the depressive position must be considered more fundamental and primitive than the paranoid.

From 1948, Michael and Enid Balint developed the eponymous Balint Group as a unique, radical application of understanding regression in the ordinary medical practice. The main objective is to explore the counter-transference of the doctor to his patient using free association within a group setting. Balint’s  ‘The Doctor his Patient and the Illness’ (Balint, 1957), which continues to be very influential in medical practice throughout the world, applied  ‘basic fault’ theory to the interaction between doctors and their patients, as fault lines in communication with unconscious affect, allowing the unconscious dynamic of the interaction to emerge.

Balint was Ferenczi’s literary executor and brought the original manuscript of The Clinical Diary written in his last year to London, as well as Freud’s correspondence with Ferenczi, Anna Freud having the other half. The publication of these two works, which contained the core of the Budapest Psychoanalytical School and its historical development, were published after his death.

Michael Balint died on the 31st December 1970 whilst serving as President of the British Psychoanalytical Society. His theories on regression are helpfully buttressed by Alice Balint’s essential paper of 1939, `Love for the Mother and Mother Love’ and, half-a-century later, by Enid Balint’s 1989 paper on `Creative Life’, both of which add a key dimension to his work and which kept and developed the flame of Hungarian psychoanalytic thought alive.