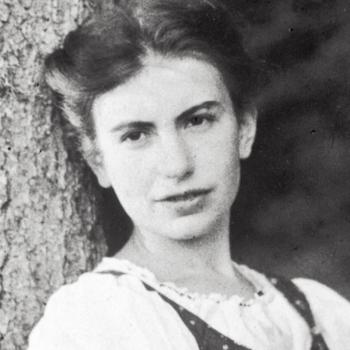 Anna Freud was born in 1895 in Vienna, the sixth and youngest child of Sigmund Freud and Martha Bernays.

From early childhood, she did not get on with her mother and felt very jealous of her immediately elder sister. She admired her father greatly and by the age of fourteen already showed a real interest for psychoanalysis. In 1917 she started work as a primary school teacher, a vocation she greatly enjoyed, but which was cut short when she contracted tuberculosis.  During her protracted recovery she read the writings of Freud and his colleagues, which galvanised her determination to become a psychoanalyst.

She started her own analysis with her father, a not unusual occurrence in those days. She continued to study the psychoanalytic literature and started work with patients. She also took part in lively exchanges with colleagues. She became a Member of the Vienna Psychoanalytic Society in 1922, following presentation of her paper ‘Beating Fantasies and Daydreams’ and begins to work psychoanalytically with children.

In 1923 her father was diagnosed with cancer and this precipitated Anna Freud into taking unexpected responsibility in the newly established Vienna Psychoanalytic Institute. In 1925 she became Secretary of the International Psychoanalytical Association (IPA), later becoming Honorary President in 1973 until her death in 1982.

Anna Freud published in 1927 ’Introduction to the Technique of Child Analysis’ which she was invited to present later in the year in London. She was strongly criticized by Melanie Klein and her colleagues and it became clear that both women’s had widely differing points of view regarding the theory and practice of child psychoanalysis. Regretfully, a rapprochement was never possible.

In 1936, with ‘The Ego and the Mechanisms of Defence’, her first major book, Anna Freud returns to and greatly expands the existing ideas about defences. She discusses through describing various mechanisms of defence how the ego attempts to protect itself from danger arising from both inside the individual and outside him, especially to protect itself from being helplessly overwhelmed. This book was very well received and remains a standard text today.

In 1937 she opened the Jackson Nursery in Vienna for extremely deprived toddlers.  Closed in 1938 due to the arrival of the Nazis, the Freud’s subsequently fled Austria.  Ernest Jones (former IPA President) devoted great energy and remarkable skill to bring them safely to London and Anna Freud remained deeply indebted to him.

In 1941, Anna Freud, with her friend and colleague Dorothy Burlingham, opened ’The Hampstead War Nurseries’, caring for babies, toddlers and young children, separated from their families by the vagaries of the war.  In-service training required staff to write detailed observations about the day-to-day behaviour of the children. These observations were discussed every evening with Anna Freud and Dorothy Burlingham and their understanding became crucial in helping to refine the insight in the child’s normal and pathological development.  These observations became the basis of two fascinating publications entitled ‘Young Children in War Time’ (1942) and ‘Infants without Families’ (1944).

With the creation of the Hampstead Child Therapy Course and Clinic in 1959, she pursued a threefold aim. Provide training in child psychoanalysis, create a child and adolescent clinic and develop a place for research. It was a vibrant place of learning , enhanced further by developing links with University College London. The Hampstead Clinic was renamed the Anna Freud Centre after her death.

In her 1965 publication ‘Normality and Pathology in Childhood’, she describes a coherent theory which gave due weight to all stages and areas of a child’s development from infancy to adolescence. Her theory allowed the analyst to distinguish material from different areas and levels of development and to view psychopathology against the background of normal development, thus achieving a balanced understanding of childhood disorders.

Through a number of specific publications, talks and seminars, Anna Freud demonstrated a deep dedication to sharing her analytic understanding with all those who came into contact with children, specifically teachers, parents, nurses, paediatricians and lawyers.

She was a strong voice alongside James and Joyce Robertson, John Bowlby and Isabel Menzies Lyth in studying the impact of hospitalisation and separation on young children.

Much had to be left out from this brief survey of Anna Freud’s work, but despite her consistent and unwavering identification with the work of her father, it is clear that she made also substantial and original contributions in her own voice.

You can learn more about Anna Freud with our new online course.