The Roots of Sport - Michael Brearley

The Roots of Sport[1]

For those to whom sport doesn’t appeal, it seems futile, pointless. They remember hours of misery at compulsory school games on cold sporting fields. They were perhaps physically awkward, and picked last.

Yet every small child, before self-doubt, and invidious comparison with other children, gets a grip, takes pleasure in his or her bodily capacities and adroitness. Gradually the child achieves a measure of physical coordination and mastery. Walking, jumping, dancing, catching, kicking, climbing, splashing, using an implement as a bat or racquet – all these offer a sense of achievement and satisfaction. Sport grows out of the pleasure in such activities.

Moreover, this development in coordination is part of the development of a more unified self. Instead of being subject, as babies, to more or less random, stimulus-response movements of our limbs, we learn to act in the world according to central intentions and trajectories. We begin to know what we are doing and what we are about. The small child gradually finds a degree of rhythm and control through and in its movements. And there is the pleasure of improving.

So far, dance and sport are barely distinguishable. Sport proper starts to emerge when competition with others plays a more central role alongside the simpler delight in physicality. ‘I can run faster than you, climb higher, wrestle you to the floor’. Aggression enters in more obviously, to combine with the flamboyance that is already in place.

In a poignant account by Julia Stone[2] of weekly therapy sessions with a disabled child, Tom, who died three months after his third birthday, is a story suggestive of such universality of pleasure in physical achievement. Tom’s two and a half year old body was tiny and withered. His understandably protective mother struggled to allow him to come fully alive. In the therapy, it seemed important for him to ‘be able to strut his stuff and to protest about some of the things he couldn’t do’. One of the child therapy rooms was a space with cushions, mattresses and soft balls of various sizes; a safe place for rough play. At one point Tom, whose mother was anxious about his ability to cope with such physicality, indicated that he would like to play in this ‘pillow room’. “Despite his pronounced limitations to independent motility” Stone writes, “he entered vigorously into doing what he could, showing us how he could kick and roll and throw, and so a dialogue began, describing Tom as the rolling boy, the kicking boy, the balancing boy. With each named accomplishment Tom’s smile grew broader and brighter… Soon after, sitting at the table in the therapy room…engaged creatively with play dough, Tom looked at me, smiled. He said, ‘It’s a perfect world’… It was a precious moment. Tom, a little boy, present in the moment of creative engagement, at one with his life, a perfect moment”.

If human beings were not combative no one would have invented sport. But if human beings were not also cooperative neither team nor individual games would have come into existence. Rivalry can—and indeed should—be taken close to the limit. But alongside this, sport also involves the recognition of the unspoken realities of the spirit, respect and generosity of the game. This is not merely a matter of obedience to the laws or rules of the game; it also involves ordinary civilities that oil the wheels of relationships and collegial activities, including consideration, respect, and the recognition of limits.

The Latin etymology of both ‘rival’ and ‘compete’ reflect this fact: rivalis meant ‘sharing the same stream or river bank’, competens meant ‘striving together with’, ‘agreeing together’, as in ‘competent’.

Sport is an area where aggression and the public demonstration of skills and of character are permitted, even encouraged. For many people otherwise inclined to be inhibited or self-conscious, sport offers a unique opportunity for self-expression and spontaneity. Within a framework of rules and acceptable behaviour, sportspeople can be whole-hearted. Such people – including me - owe sport a lot; here we begin to find ourselves, to become the selves that we have the potential to be.

In this process, the child and the adult have to learn to cope with the emotional ups and downs of victory and defeat, success and failure. They – we – gradually manage to keep going against the odds, to struggle back to form, to recognize the risks of complacency. We have to learn to deal with inner voices telling us we are no good, and with voices telling us we’re wonderful. In sport the tendencies to triumph when we do well and to become angry or depressed at doing badly are often strong; we have to find our own ways of coping with them. Arrogance and humiliation have to be struggled against, whilst determination, proper pride and good sportsmanship are struggled towards.

Spectators identify not only with the skills of sportsmen but also with their characters, their characteristic ways of facing those twin impostors, success and failure. These scenarios are central in the dramas of sport.

Sport calls too for a subtle balancing of planning and spontaneity, of calculation and letting go, of discipline and freedom. Australian cricketer Greg Chappell wrote, “Premeditation is the graveyard of batting”. And though this is importantly true, it needs qualification or expansion; for two reasons. One is that we need to set ourselves in certain ways. A batsman playing in a Twenty 20 match has a totally different orientation to the task from a player in a Test match. In one context he or she is looking to score off every ball; he is aware of the pressure of time, and of the urgent need to evaluate quickly where his side should be in two overs, say, or five. Second, the advice may in some cases be a counsel of perfection, aimed at a highly skilled player, and geared to a scenario in which there is infinite time. All batsmen have to do some premeditation, if only in ruling out certain options. Even that mercurial genius Denis Compton looked to be on the back foot when facing quick bowlers. Most players pre-decide whether to go for the hook or alternatively to defend or evade the short-pitched ball; they adopt a policy; they premeditate. In shorter games, all batsmen pre-determine, or at least have a range of possibilities in their minds.

Moreover one has to train oneself in the sporting skills, form a reliable technique, and work at it. But – and this I think is Chappell’s point - having disciplined ourselves, having set ourselves according to the situation of the game, we then have to let ourselves go, trusting to our craftsmanship, skill and intuitive responsiveness, without further interference from the conscious mind. Like parents and psychoanalysts, we have a complicated job to do in enabling our own selves to find the right balance between self-discipline and free rein. Occasionally this leads to that sublime cohesion of elements that constitute being in the zone, or being on form. At the peak of performance one is simultaneously alert to possible lines of attack by individual and collective opponents, and able to respond with more or less uncluttered minds to the next play or assault. The moments for the sportsman when body and mind are at one, when we are completely concentrated and completely relaxed, aware of every relevant detail of the surroundings but not obsessed or hyper-sensitive to any set of them, confident without being over-confident, aware of dangers without being over-cautious – such rare states of mind are akin to being in love. They involve a marriage between the conscious control mentioned above with the allowing of a more unconscious creativity through the body’s knowledge.

As the psychoanalyst Marion Milner put it about table tennis:

“What surprised me was that my arm seemed to know what to do by itself, it was able to make the right judgements of strength and direction quite without my help. Here the internal gesture required seemed to be to stand aside”.

Michael Brearley is a psychoanalyst in London, and was President of the British Psychoanalytical Society and the Marylebone Cricket Club (MCC). He has taught psychoanalytic topics at the Institute of Psychoanalysis, Psychoanalysis Unit at UCL and abroad. He also writes and gives talks on psychoanalysis, films and sports. In his previous career, he was a lecturer in philosophy at the University of Newcastle upon Tyne, and a professional cricketer. During his career in cricket he captained Cambridge University, Middlesex, and England in 31 test matches.

[1] An earlier and longer version of this was given as the Bradman Oration in Melbourne, Australia in October 2013, and another version was published in The Times in November 2013.

Photographs: Photographs of Richard Scholar and Rodney Marsh reproduced from The Return of the Ashes by Mike Brearley and Dudley Doust, published by Pelham Books, London (1978). 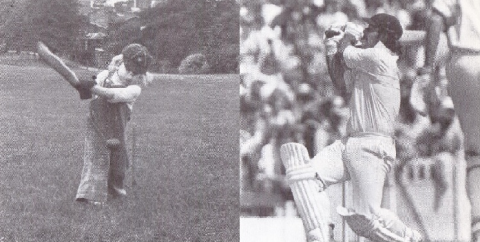