Encounters with Nazism: On the Third Reich and the History of Psychoanalysis - Daniel Pick

In May 1941 the Allies gained an unexpected opportunity to explore the mind of a leading Nazi when Rudolf Hess, deputy leader of the Nazi Party, landed in Scotland. Hess claimed to have flown to Britain on a serious peace mission, but his captors did not believe this, and he was moved to England and later Wales, as a prisoner of state. Over the next four years, as Hess’s physical and mental symptoms grew more bizarre and clamorous, army doctors, including several with a close interest in psychoanalysis, studied his behavior and communications. Hess was cast, on the one hand, as an exemplar of Hitler’s fanatical following and, on the other, as the Fuhrer’s eccentric alter ego. Either way, the psychiatrists who treated him became increasingly interested in what their patient might reveal about the psychopathology of Nazism itself.

In researching my recent book, The Pursuit of the Nazi Mind: Hitler, Hess, and the Analysts, I was able to study the various clinical notes written about Hess and many other prisoners during the 1940s and at the Nuremberg trial. The large cache of documents that were assembled by both British and American army and intelligence officers suggest how the Allies sought to make use of psychoanalysis, psychology and psychiatry to try and understand the mindset of Nazi leaders and followers. Officials explored not only the military threat from Nazism, but also the underlying psychological states that led people to embrace the ideology. A number of significant figures at the British Psychoanalytical Society and the Tavistock Clinic, and, across the Atlantic, at the New York and Boston Societies, believed that in-depth psychological studies of Hitler and his acolytes, as well as collective portraits of the fears and wishes of the so-called masses, might provide useful military and political knowledge; analysts were asked to consider why Hitler and company gained such extraordinary levels of support during the 1930s, to predict how they might behave in the closing phase of the war, and proffer advice on the ‘re-education’ of large sectors of the German population. By understanding the popular attractions of fascism, it was hoped to gain insights that would help to entrench liberal democracy and to assist in remaking political subjects after 1945.

Hess was one of many German prisoners considered through a psychiatric and psychoanalytic lens; because of his closeness to the Führer, he was a particularly significant case; if Hess was felt to be abnormal, on the other he was regarded as a ‘pointer’ to pervasive attitudes. Henry Dicks, the deputy medical director of the Tavistock Clinic, was the army doctor who perhaps most closely analysed Hess, and attempted to decipher his phobias, erotic feelings, and paranoid system of beliefs. Dicks wanted to understand what had attracted Hess to authoritarianism and what Hitler meant to him unconsciously. He concluded that for men such as Hess, Nazism was less the expression of a rational political calculation than a symptom of, or better, a false solution to, profound mental confusion: Hess’ politics, he believed, was a serious psychic affliction masquerading as a ‘choice’. During the 1930s many foreign observers had debated Hitler’s mental state, and asked was he amenable to rational negotiation. By 1938, President Roosevelt confessed to a group of senators that he believed the German leader to be frankly insane. In this context psychoanalysis, whilst still of course controversial, was to gain a purchase upon various key figures within political and military organisations and in wider public discussion.

Hitler, Dicks surmised, solved a psychological problem for Hess, not only by providing the authoritarian leadership he craved, but also by standing in, unconsciously, for an all-powerful and sadistic father figure he could serve and revere, whilst all sense of weakness, mess, and corruption was blamed upon, and projected into, the Jews and other reviled and supposedly ‘degenerate’ groups. Army psychiatrists, as well as medical orderlies, went to considerable lengths to trace Hess’ l ‘back story’, to track his fluctuating state, to describe his demands, desires and patterns of sleep. Dicks and other psychiatrists brought to the fore the idea that political ideologies played upon people’s inchoate terrors and longings, and might well express a kind of madness.

By the end of 1941, Hess was complaining of total amnesia, whilst also convinced the British were determined to poison him. Even when Dicks administered a so-called ‘truth drug’ in 1944, with Hess’s consent, in the hope of alleviating his amnesia, the patient/prisoner revealed little except for his cramps, thirst and sense of ‘fog’. Later at Nuremberg, Hess would dramatically retract his claims of amnesia, to the consternation of his lawyer and fellow prisoners, but even after this volte face, the psychiatrists remained puzzled as to his motives and the real state of his mind. Hess had insisted on facing trial, even as he denounced the court as a charade. His own lawyer had sought his removal from the proceedings on the grounds of mental impairment. All the occupying powers sent psychiatrists to report on the case and declared him sane enough to remain in the dock, alongside the other war criminals). Hess became an international cause célèbre. In his handwritten notes about the patient, Dicks had earlier speculated about how certain Germans such as the deputy Fuhrer might be unconsciously envious of the English character and suffering from an ‘inferiority complex’. Like many clinicians in this period, Dicks was interested in how fascism served to provide an ‘imagined community’, how it offered a particular kind of solace, and, at the same time, how it mobilized a mad form of superego. He also reached for the psychoanalytic understanding of masochism and sadism in order to understand Nazi emotional ties.

While Hess was assessed in England, in the United States agents from the Office of Strategic Services (OSS), the forerunner of the CIA, were attempting an analysis of Hitler, albeit at a distance and with no direct clinical experience of their subject. They hoped that an understanding of Hitler’s mind would shed light not only on one individual, but also more broadly upon the psychology of the German people who had succumbed to him. To be sure, such a swift intellectual move between accounts of the leader and his followers, and from a speculative analysis of one individual to an account of groups and nations would be regarded as methodologically naïve and problematic nowadays, but for the Harvard psychologist and psychoanalyst Henry Murray (one of those who reported on Hitler to the OSS), this was part and parcel of necessary intelligence work in the context of war. Murray believed that to understand Hitler would go some way to understanding what he believed to be the ‘typical’ Nazi mind. In fact, doubts about such ‘wild analysis’ and critique of the application of psychoanalytic ideas outside its core clinical setting, were also evident, at the time; a running debate ensued about the possibilities and limits of Freudian method in the sphere of political analysis; the debate was joined by academic commentators too, such as the anthropologist Margaret Mead, and the sociologist Talcott Parsons, both of whom contributed extensively to intelligence briefings.

Although it is hard to be sure what precise difference the psychological work of Dicks and his counterparts such as Murray and Walter Langer at the OSS made to the military effort, this body of work was a significant development, and clearly presaged the tradition of political profiling that became commonplace in intelligence agencies during the Cold War; such inquiries influenced psycho-social studies of ‘the authoritarian personality’ and spawned numerous investigations of the popular lure of militarism and racism, and the appeal of populist demagogues. A number of psychoanalysts during the 1940s, building on Reich’s pioneering study in the previous decade, The Mass Psychology of Fascism, sought to reveal how under Nazism people’s unconscious longings could be mobilized and to consider how the regime was able to appeal to powerful sexual excitement, and to deep feelings of hatred, love, grievance, envy and sadism.

Such precursors of contemporary psycho-social studies were, as noted, sometimes incautious in their generalized claims to have understood the meanings and determining causes of the choices made by millions of voters to back Hitler and even, it would appear, to fall in love with him; but they were surely right to argue that neither liberalism nor Marxism had as yet satisfactorily addressed and understood the psychic power that fascism exerted, nor to have grasped the complex nature of such political enjoyment and feeling of belonging. Politics, these analysts proposed, entailed both conscious and unconscious processes, and all too easily played upon mad forms of idealization and ferocious demonization, extreme ‘splitting’, manic ‘solutions’, a drive towards death and destruction, and an utter dehumanisation of the other. These processes, of course, have not gone away, and nor has the endeavor by psychoanalysts to bring clinical insights to bear outside the consulting room. Psychoanalysis should never, of course, claim to offer a substitute for history, anthropology, or sociology in discussing complex political phenomena. Nonetheless, historical accounts of modern politics that pay no attention to the vicissitudes of unconscious fantasy and the power of denial miss a key dimension. Psychoanalysis has much to say – much that needs to be said -  about the inchoate emotional ties that form us as political subjects, and that may well lure us towards fascist solutions (with their promise of safety from chaos through trampling upon democracy); in that sense, among others, it remains of acute political relevance today.

Daniel Pick’s book, ‘The Pursuit of the Nazi Mind: Hitler, Hess, and the Analysts’ was published by Oxford University Press in 2012. 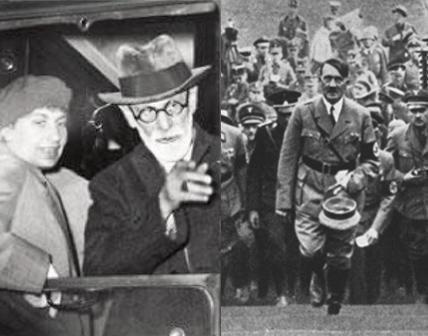