Rusalka - How Deep Is Your Love? By Sara Collins

Rusalka is the title of an opera by Dvorak, based on a fairy tale story combining themes from The Little Mermaid by Hans Christian Andersen, Undine by Friedrich de la Motte Fouqué, and other works.  Recently, the opera was performed at the Metropolitan Opera in New York with Kristine Opolais in the title role of Rusalka, in full command of her art, as she sang the famous ‘song to the moon’.

Ruslaka is a nymph who lives with her father and sisters in a timeless mythical lake. They lead eternal but soulless lives in the waters; coming out at night to dance by the light of the moon.  Theirs is a remote and isolated world of magical powers, but without sun or love.

The opera opens with Rusalka’s moving plea to her father to let her become human.  She has seen a prince who came by the lake and has fallen in love with him.  She desperately longs for the human experience of love.  Her father warns her of the grave perils of this wish and explains the sacrifices she would have to make in order to achieve the transformation into a person.  She would lose her voice, the gift of eternity and the company of her sisters.  Rusalka ignores the dangers, and overcome by yearnings to experience human emotions and walk in the sun, she undergoes the transformation of becoming a mortal creature, so she can be with the prince.  In doing so she crosses a point of no return.  She is seen as a transgressor of a supreme boundary.

After becoming human Rusalka finds herself in the prince’s palace, but she is unable to talk.  Still, she believes in the power of love to overcome all impediments.  However, not having been prepared for life with humans she is ill equipped to relate to the prince.  He is mystified by her muteness, awkwardness of manner, begs her to talk, and finally considers her cold.  She makes desperate speechless attempts to convince the prince of her deep love.  But, it is not enough.   She is betrayed and must therefore immediately return to the lake where she is banned from her sisters’ company.  As was the pre-condition for her transformation, she now has the awful fate of having to lure the prince she loves to his death. The prince comes to seek Rusalka by the lake and begs for a kiss that will be the fatal last one. The couple unconsciously collude in their mutual destruction.   They see death as preferable to not being together.  The prince dies. Rusalka, alone and ostracised for her transgression, sinks into the depths of the lake where she will live in eternal limbo.

In a letter to Martha Bernays Freud (1882) wrote: ‘Oh, the myth-forming power of mankind!’ (written in parenthesis).  This comment points to his unswerving interest in fables and fairy tales, brought to light in his case studies and other works.   Two myths most salient to Freud’s body of work, Oedipus and Narcissus, have become woven into the very fabric of psychoanalytic language.   Freud (1913) noted the prevalence of fairy tales in the mental life of children, and how dreams and associations often included elements of legends and fables.  He observed that for some patients, the recollection of fairy tales replaces memories of their own childhood.  Thus the mythical story can function as a screen memory.  Such patients would produce more distant, obscure associations in the form of a parable in an attempt to protect themselves from the traumatic impact of the original memory and its affect.

Rusalka, the opera, unfolds themes of longings for the experience of love in the context of sexual awakening in a timeless adolescence that the legend represents.  It is timeless in the sense that this ‘awakening’, happens to an ageless nymph, and so it could be telling of a state of mind that can be invoked at any stage in life.  For Rusalka the specific moment of awakening comes when she sees the prince by the water.  This seeing is an act of linking an external perception with her internal emotional state.  Though it heralds new developments for the future and the opening of a new, unfamiliar world, for Rusalka it also causes painful dilemmas, as this separation in its particular context portends a catastrophic loss of everything she knows.  Her father represents an internal parental object, experienced as restrictive and with prescriptive views of his child’s future.  For her what it takes to ‘move away from home’ is nothing short of a complete transformation, the crossing of worlds and an acquisition of a new identity.  She takes courage and strength from her longings for human emotions she only glimpsed when she saw the prince.  Hers is a passion for the warmth of feelings.

The symbolic implications of the contrast between emotionless living in dark waters by the moon, and that of walking by the sun on land, are not difficult to see.  It is equivalent to love and engagement with the object, including possibilities for loss, when mortality, if nothing else, will claim the protagonists on the one hand and, and the presumed safety of magical, eternal sameness, strictly cut off from affect, on the other.  It is an allegory too about how growing up and maturing can be experienced not as a natural transformation, but rather as a transgression into the forbidden, and the burst of sexuality is seen as threat to the parent.

Dilemmas of separation and individuation alongside sexual maturation and ‘coming of age’ have been widely discussed, including the idealisation of the love object, ‘falling in love’ and its pitfalls.  Rusalka has no understanding of how to relate in a ‘human’ way, and her fantasy that her deep love will overcome all ends in grief.   Laufer (1966) has written on ‘Object loss and mourning during adolescence’.   This opera dramatically highlights all of these themes, through artistic expression.  As the mythical story unfolds there is a question:  Is Rusalka’s wish to follow what she glimpses in the world of humans, embodied in the love of the prince, a psychical development; or does this pursuit represents a transgression of boundaries making the tragic end therefore unavoidable? The answer depends on whose point of view the question represents.  Seen from the father’s point of view, and that of the community of her sisters, she is charting a perilous territory.  Put another way: Is her father the parent who can’t let go of his child, or is he genuinely employing his wisdom in an attempt to protect her from catastrophe (and there is a glaring absence of the mother in the story).

Rusalka’s foray into the most coveted of human emotions ends in disaster for both her and her prince.  But, she has had the experience her sister nymphs could not dare to know.  The modern audience’s sympathies, it seems, lie with Rusalka’s project of transformation, for she represents the universal pursuit of love.

The principal emotions in this opera are those of yearning for the human experience of love, betrayal and loss.  Sacrifices made in the pursuit of love are juxtaposed with the sad reconciliation to the limitations of its power.  Opolais as Rusalka employs her great vocal skills to express irrepressible longing for a transformation, at any cost.  But as well, a soul troubled by the fear of the unknown and the challenge she poses to her lover, as though in premonition of the tragic end.  At the beginning of the opera, while still a mermaid, her movements confined in a long dress trailing into the lake, accentuate the dramatic, almost contorted emotional longings, as she performs ‘Song to the moon’:

“Moon, high and deep in the sky
Your light sees far,...
stand still a while
and tell me where is my dear...
For at least momentarily
let him recall of dreaming of me.
Illuminate him far away,..
may the memory awaken him!
Moonlight, don't disappear, disappear!

A different way of looking at Rusalka is as an allegorical representation of an emergence from psychic retreat (Steiner, 1996).  The lakeside under the cold moon being the habitat of the tale’s mythical creatures is constantly juxtaposed with walking in the sun and being in a couple (marrying the prince).   Living in the depths of dark waters could be seen as a metaphor for the retreat from reality, whilst the attempt by Rusalka to become human and know emotions of connectedness represents a struggle to emerge from a state of retreat.   Steiner maintains that an experience of separateness is necessary for this emergence to take place.  This involves mourning, a process originally explored in Freud’s (1917) ‘Mourning and melancholia’.  Could it be that Rusalka fails in her effort to transform from a detached nymph into a human capable of relationships, because she has failed to mourn?  Was the transition too hasty?

Psychic retreats are linked with grievance and the unconscious wish for vengeance in the context of unresolved oedipal conflicts.  This analytic view would cast Rusalka in a wholly different light.  She is not the innocent young daughter on a quest of self discovery and the pursuit of love.  Rather, she nurses grievances and exacts revenge.  She deserts her father (and sisters) giving vent to vengeful resentments in the context of oedipal hurt.   Since the father is not going to make her his sole love object she will take up the antithesis of everything he upholds, reject his world and marry a human.

In the 2012 production at the Royal Opera House Covent Garden, Rusalka was portrayed as a prostitute working in a sordid brothel, in direct rebellion against her repressive upbringing.  A number of patrons walked out and boos were heard at the curtain call.  Some critics were outraged.  Rather like Rusalka’s father, they were protective of her image, the one they cherished.  Thus they enacted the father’s protestations against his daughter’s misguided intentions.  Audiences, it would seem, prefer the classical interpretation of the immature and ill-equipped Rusalka, whose yearnings for love and brave transformations for the sake of it are thwarted, partly by her own restraint, and partly by the poignant limitations of the power of love.

But, this public violent objection to the production of a much altered Rusalka interpretation, of a one who is far removed from innocence, could also be seen differently.  It was as if, in this performance, the undercurrents of her oedipal hurt and rage were projected from the stage to the audience who, unwittingly, accepted this projection, were identified with it, and enacted Rusalka’s own primal dissent.

Freud, S. (1913). The Occurrence in Dreams of Material from Fairy Tales. The Standard Edition of the Complete Psychological Works of Sigmund Freud, Volume XII (1911-1913).

This article was originally printed by New Associations, published by the British Psychoanalytic Council. 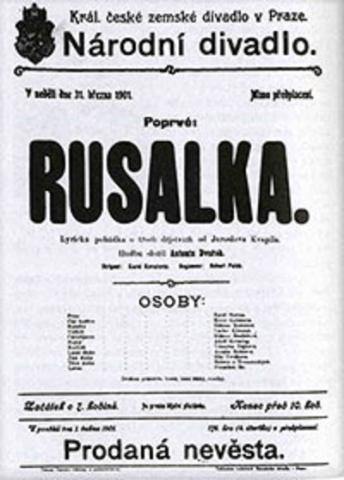