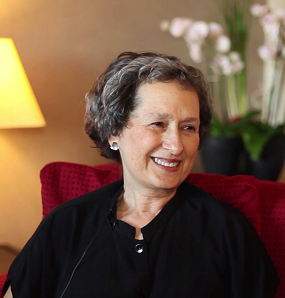 Dana Birksted-Breen is a training and supervising psychoanalyst in full-time private practice, as well as Editor in Chief of the International Journal of Psychoanalysis and former Editor of the New Library of Psychoanalysis. She has taught, chaired conferences, and led clinical workshops in many countries around the world.

Born in the U.S.A, Birksted-Breen’s family moved to Paris when she was nine months old, and then to Geneva when she was eleven. Living in Francophone countries with Anglophone parents, she grew up bilingual. She has been interested in psychoanalysis from an early age, first encountering Freud’s writings in her school library. His model of the human mind was intriguing to her, tapping into her deep curiosity about what makes people think and act in the ways they do. She was compelled by the central psychoanalytic idea of the unconscious: the hidden yet powerful source of our conscious experience. Growing up with two different cultures and languages also played a part in her gravitation toward psychoanalysis. In Birksted-Breen’s view, psychoanalysts are often outsiders in one way or another, and therefore able to see things from a perspective that can be of great value to analytic work.

After completing her preparatory studies at the University of Geneva, Birksted-Breen studied for a degree in Psychology (Licence ès Lettres) at the Sorbonne in Paris. Upon graduating, she moved to England, studying for a year at the Tavistock before embarking upon a PhD at Sussex University supervised by Marie Jahoda. She wrote her thesis on changes in women’s self-concept with the birth of a first child, whilst also assisting in research at the student health centre. Once she had gained her doctorate, Birksted-Breen trained to become a psychoanalyst, gaining membership of the British Psychoanalytical Society in 1980.

While firmly within the British psychoanalytic tradition, Birksted-Breen does not align herself with any one group, instead ranging across theories that stimulate her thinking and contribute to her particular lines of enquiry. Her thought is rooted in the work of Freud, Bion, Klein and Winnicott, but she is also interested in the writing of many French and Italian thinkers, among others. She has explored the difficulty of truly grasping the analytic theory of other cultures in several papers on translation and comparison, including a 2010 paper, ‘Is Translation Possible?’ She has also contributed to the development of the Clinical Comparison Method, which studies and compares models of psychoanalysis from different countries and psychoanalytic cultures.

Birksted-Breen’s theoretical writing has always been intimately connected with her clinical work, each informing and developing the other. She is interested in the points of connection and disconnection between theory and practice, and the creative spaces formed between the two. Over many years she has investigated deeply ideas of identity, sexuality, symbolization, time and temporality, and the psychoanalyst’s mode of attention in the session. Her 2016 book, The Work of Psychoanalysis: Sexuality, Time and the Psychoanalytic Mind, brings together some of her explorations in these areas, including a recent development in her thinking: the concept of ‘bi-ocularity’. With this term she describes the dual attentional position in which an analyst must place him- or herself during the session, in order to create space for ‘that which is ‘other’’, and thus for the possibility of transformation in the patient (‘Bi-Ocularity, the Functioning Mind of the Psychoanalyst’, 2016).

Time and temporality have formed a prominent thread through Birksted-Breen’s work, in connection with ideas of stasis, change, impasse and transformation. She emphasizes the importance of Bion’s concept of ‘reverie’, proposing the notion of ‘reverberation time’ for the time element in the process of reception and psychical transformation, which creates the potential for symbolic thinking and works to avoid impasse in the analytic situation. This is connected to Freud’s emphasis on the need for the analyst to hold an ‘evenly suspended’ attention in the session. In a paper from 2012, ‘Taking Time: The Tempo of Psychoanalysis’, Birksted-Breen explains the fundamental significance of time in analysis:

"While the issue of time in psychoanalysis is usually mentioned simply in relation to the fixed duration of sessions, I am here ascribing a central place to time as a function of the specific modality of the analytic interchange itself, which stems from the analyst's evenly suspended mode of attention."

She has also written in depth on femininity, masculinity and sexual identity. Around this long-contested, complex topic, provocatively yet inconclusively explored by Freud, Birksted-Breen has explored a range of issues, from pregnancy to anorexia and the fragile formation of masculinity. She has been especially interested in the ‘masculine element’ and the ‘feminine element’ in both sexes, and her important 1996 paper, ‘Phallus, Penis and Mental Space’ has been widely cited.

Another central component of Birksted-Breen’s career has been her work as an editor. After several years as the International Journal of Psychoanalysis’ Book Review Editor, she was the journal’s Co-Editor in Chief between 2007 and 2012, and became its Editor in Chief in 2012. She was also General Editor of the New Library of Psychoanalysis from 2000 to 2010, in which role she promoted a more international approach. In line with her interest in comparative psychoanalysis and translation, Birksted-Breen introduced more non-British books into circulation, to open up dialogue and enquiry between different countries, languages and psychoanalytic traditions.

As an editor Birksted-Breen enjoys helping authors develop their ideas, and finds in the editing process a parallel with the work of psychoanalysis: both involve working out what another person – author or analysand – is trying to express beyond what he or she is aware of, thereby aiding the elucidation, deepening and development of ideas. This curiosity about other people’s ideas, how they can understand and sometimes transform them, is the curiosity that first drew Birksted-Breen to psychoanalysis as a young woman, and which continues to drive her practice as a clinician, theorist and editor.

2016 Birksted-Breen, D. Bi-Ocularity, the Functioning Mind of the Psychoanalyst. International Journal of Psychoanalysis, 97:25-40.

(Translated into Italian and Portuguese).

1975 Breen, D. The Birth of a First Child, Towards an Understanding of Femininity. Tavistock.